3 Money Clues You Have Relationship Problems 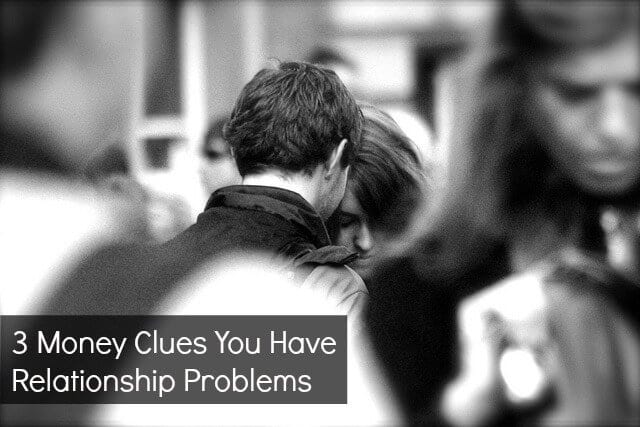 I see couples who argue about money all of the time; but they are productive arguments, with individuals fighting for balance and who can laugh about it afterwards. What really worries me is when I meet with only one half of a couple—then I suspect that they are facing some relationship problems, which might turn into real money challenges.

The 3 Clues of Relationship Problems

Here are three examples of relationship problems that I have seen lead to divorce more than a few times:

Lack of Reciprocity. Jeannette felt like she was carrying the weight of the world on her shoulders because she was in charge of every aspect of her and Ted’s financial situation: Jeannette paid all of the bills, reviewed the investments and decided how money should be funneled to different goals. “I feel like the mommy, because all Ted wants to do is play and not worry about any of this stuff, and it’s up to me to navigate everything. He doesn’t even want to talk about it.”

Lack of Compromise. Marie did a lot of research to figure out the best ways to save more money each month, but her husband vetoed all of her ideas that involved him. “Bob knows we need to reduce spending to pay off our credit cards, but he refuses to skip a couple of ‘boys’ nights out’ or stop buying liquor every week. It makes me wonder why I should bother trying to limit my spending if he refuses to consider limiting his in any way.”

Lack of Communication. Sometimes this is the least obvious one because it pervades every aspect of the relationship. Elizabeth told me, “I know that John is very interested in what I found out from working with you, but he felt like I could explain things as well as you could. And he’s so frustrated from being unemployed for 2 years that he didn’t feel like coming today.” I never met John and two years later, he and Elizabeth were divorced.

I didn’t face any money issues that contributed to relationship problems in my last long-term relationship, but when I think back, these three things were issues in other ways that could have signaled me that my relationship was headed toward trouble.

I’ve said before that relationships only work if both parties are willing to row the boat. While you are deciding whether or not you’re in an equitable relationship that will see you through the long term, here are some steps you can take in the short term:

Limit expensive trips. Some people take vacations when they are having relationship problems, because they think that time away from the routine will help them reconnect. I say, if you have trouble connecting during your regular life, how much is one trip going to help? Make changes to reconnect in your normal routine before throwing money at the problem.

Don’t buy a home. I’ve seen some people think all of their problems stem from being too squished in a small place—so they buy a bigger one and continue to have relationship problems. Unless you’re homeless or live in a dangerous environment, your problems having nothing to do with your space.

Make a weekly money date. It doesn’t have to be long. The reason most people don’t want to talk about money is they hate to be criticized or rehash things they feel like they have no control over. So the weekly money date is to:

If you can do this for a month, you can then move on to making joint goals!

P.S.  One thing that will is aligning your shared values and priorities with your money – you can download my free Chief Initiative workbook here.

Four actions to get more from your money
October 20, 2021

The perfect idea to drive all money decisions
October 6, 2021

Financial planning is not an emergency
September 29, 2021

Stay Sane With Your Investing
September 1, 2021
Go to Top
If you'd like more information like this,
be sure to check out my free Money Chakra ebook.
Don't forget to also check out my FREE
Team Delegation Planning Worksheet.