3 Reasons Entrepreneurs Need to Pay Attention to Their Money Energy

You are here:
Conscious SpendingEntrepreneurs 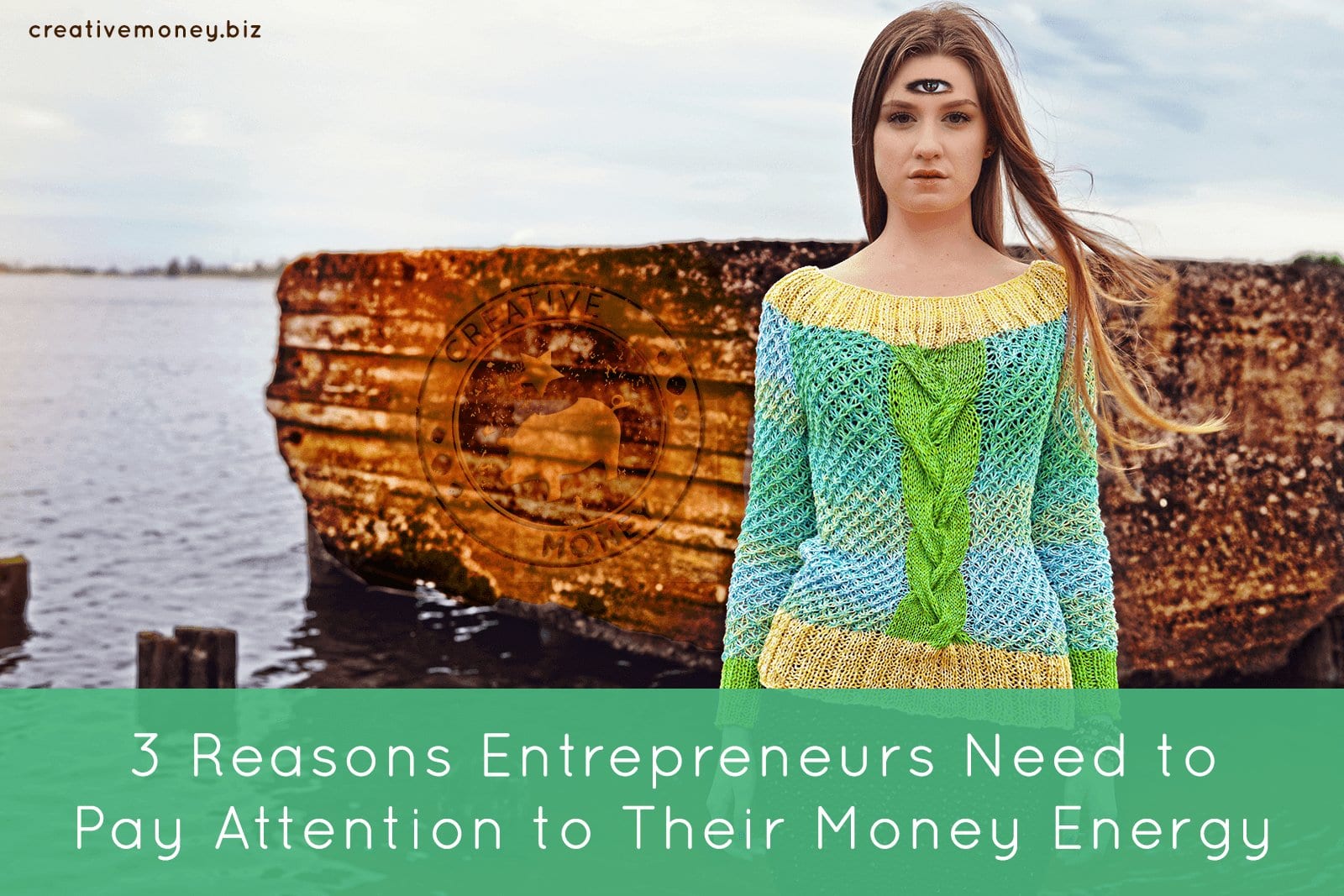 A lot of times, entrepreneurs aren’t immediately that excited to talk to me about their money energy. Unless they’re already super in tune with their spiritual and energy side, they often think that business is no place for chakras, woo-woo energy stuff and that their financial planner/coach person is the last person who should talking about energy — but they are so, so wrong.

I heard it said once that starting a business was like going into deep personal therapy, and I think that’s so true.  All your personal issues tend to come up again and again in your business, no matter how hard you try to be corporate or keep it separate. And that’s a good thing — but it is something that needs to be addressed.

If I brought all my codependency tendencies (say that three times fast) to my business, I wouldn’t be a very good business owner. I would get way over invested in my clients’ lives, in their successes and failures. And I would be tempted to offer my services for free or at a discount all the time in order to get people to like me, or help them out because they’re going through a rough patch… And so on.

In fact, I think there are three main reasons that entrepreneurs should embrace their money energy as much or more than their numbers:

1. The case for energy before numbers

Here’s the deal: the numbers might make all of the sense in the world, but if you’re not stoked about it, you shouldn’t do it.

The simplest example of this is when you look at your different offers in your business. Say, for example, that you offer an e-course four times a year. It’s your biggest seller and brings in the largest percentage of your revenue.  But you hate it.  It drains you to deliver the course live and you end up pulling all-nighters when you’re launching and making yourself sick with all the work.

The numbers would tell you to pour more energy and effort into that product because it’s your best seller. But the energy is clearly telling you to step back. Maybe you find a different way to offer it, or maybe you stop offering it altogether and focus on other things. In this case, I think almost everyone would find that the positive return getting rid of that energy drain will demonstrate itself in the numbers.

Or, if you can’t get rid of a nagging worry, despite the fact that the numbers say you’re OK… Sometimes worry is just that fear of moving forward, but if you’re not building confidence over time, it might be more than that.

2. Using numbers to rationalize your crazy

Numbers can be used as a rationale to do some crazy stuff.  It seems like numbers are truth, incorruptible and unfailing — but you’ve probably seen how two sides of the government can make the same numbers tell different stories, or how numbers can be manipulated to say anything you want them to say.

Taking on debt as a new business is reasonable, but I’ve seen some crazy plans before… Like the business that was going to spend $20,000 on a membership website before they even tested the program on a smaller scale. They had completely rationalized the expense until someone from the outside — like me — went “WOAH!”

Energy, on the other hand, doesn’t lie.  If you’re excited about that membership program, that website, that’s good energy!  It means you can make it happen. But if you get a sinking feeling in your stomach when you think of the $20,000 price tag, that doesn’t lie either.  The difference between the two is where you have to find a compromise that feels right in energy and expenditure.

3. Energy will give you insights numbers can’t

You might be in the wrong place and energy will tell you that, the numbers won’t.

One of my clients had an employee she inherited when she purchased her current business.  When we first started working together, my client described the employee (we’ll call her Susan) as valuable, because she had worked there so long. The number of years of experience was telling my client a story about Susan.

But something felt “off” to me, so I asked my client a lot of questions about Susan… turned out, she liked her particular area but didn’t have any interest in growing with the business and didn’t support efforts to work as a team.

After 20 minutes I could tell this person wasn’t useful to the business and in fact, might very well be hurting it.  I didn’t tell my client to do anything other than pay attention and allow for the possibility of an even better team than she had at the time. And, I told her she has a right to have expectations (like, that employees do things how the OWNER wants them done, not how they feel like it).

Just by that change in attitude and energy, things shook loose.  Susan left the business voluntarily within the year and my client found an awesome woman who she trusts to have her back in every way possible.

The numbers said that Susan was not only a good fit, but a valuable employee — but the energy (both Susan’s and my client’s) told a different story.

What money energy are you bringing to your business and your money?  Are there similar money issues coming up for you in your personal life as well as your business life, or are you experiencing totally new energy blocks and challenges?

Where do your numbers and your energy not line up?

If you feel like there may be a disconnect, but you’re not sure where it is, I encourage you to download my free money chakra guide by clicking here.

Five Things To Be Awesome With Money
July 29, 2020
Go to Top
If you'd like more information like this,
be sure to check out my free Money Chakra ebook.
Don't forget to also check out my FREE
Team Delegation Planning Worksheet.