How To Avoid Financial Exploitation When Dating 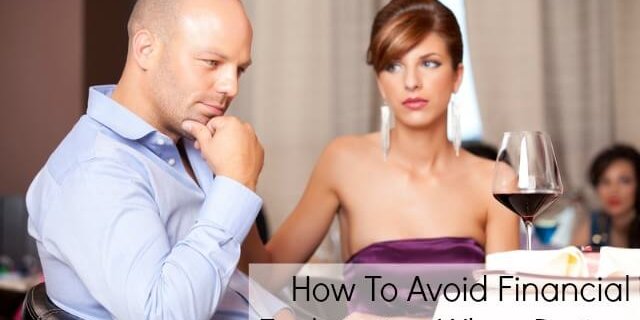 I wrote a post about a week ago that struck a nerve. I talked about how men paying for dates isn’t a money issue, and it sparked a lot of controversy; mostly, people concerned about the implications of what it meant.

For me, it means a moment of receiving, appreciation and gratitude for a single event, when I am typically the sole locomotion for every aspect of my life. For many, it meant perpetuating a pattern of exploitation of men and misinformation. Which, on one hand, makes me laugh that white men are being exploited (because that has NEVER happened to any other group of people), but on the other hand, men are awesome, and I would never want anyone to think I advocated lumping them all into one, stereotypical, unflattering category.

I think the key here, in my last post and in every situation, is to agree that when you go on dates—versus being part of a couple—it’s a snapshot. When you’re dating, you’re still trying to determine if this person should be a part of your life. Many people read “should” pay for a date or that what I suggested was prescriptive for a long-term relationship, and it’s not. Relationships are different. You’ve agreed to focus on one person and negotiate roles and responsibilities. And I find that when it comes to money, no two relationships are alike.

And for LGBT couples? Same issues. I don’t think this is a man/woman thing; it’s about the energy and intention you’re bringing to this experience. Whenever two people get together, there needs to be complementary energy. This doesn’t mean that feminine energy is weak, or passive or submissive, it’s just different. And I have found that these differences—rather than the similarities—make for a good yin-yang balance.

Leave Your Bags At Home

Dating then, simply is a goal of getting to know a specific individual better. The problem with this, if you’ve had bad experiences, you might be assessing the individual in front of you with a distorted perception. Which makes sense, because you don’t want to be hurt again, or at least not in the same way as you were hurt before…but when you bring this fear and protection with you on a date, you may say odd things, create a dating “test” to see how your date reacts, or simply may not be the best judge of the person in front of you.

One of the comments from the last post was about a man on a date who said he liked the financial advantage over his ex wife, it gave him more sway in what decisions would be made for children. I agreed with the woman for not dating him again and I thought this guy was a creep for his manipulation.

But when I thought about it over the weekend, I tried to set aside my initial perception. This guy might be a great father, who loves his kids SO MUCH that he wants to be completely involved. Maybe financial sway is the only way his ex wife will hear him and factor in his preferences in child rearing. So, he said something creepy and stupid, but he might be a great guy IF he doesn’t assume that we’re all like his ex wife. I really trust instinct, so this women who told the story was probably completely correct in making that date her last with this man, but knowing the baggage I personally carry, I made the attempt to see the other side, and shades of gray that might exist.

I can see why someone who has been hurt in the past might think that they can impose one specific rule or condition to protect themselves in the future, but I propose another way. If you feel challenged to separate issues of money when dating, then here are some tips to avoid feeling like you’re leading with money, and remember to give a new person the benefit of the doubt:

Remember to be curious. Obviously, we all have trouble coloring the world with our history and perceptions, so when a person says something weird on a date, give them a chance: “Say more about that, please,” is an easy way for them to explain themselves or confirm the conclusion you initially jumped to.

Change the dynamic. Instead of dinner at a nice restaurant, don’t try to financially impress. My favorite date of all time was when for date zero, a guy asked me to meet him at the dog park so I could meet his dachshund. I personally prefer a low-pressure environment to meet someone new and offering an unusual first date may give you a lot of insight into how that person responds and adapts. But tell them if they need to dress for it, like a hike or something!

Be TAO. TAO stands for Transparent, Authentic and Open. If you don’t feel like offering to pay, say so early on: “You know, I’m really looking forward to spending time with you, but do you mind if we go dutch on our date? I prefer to be upfront about that because I’ve had trouble with assumptions in the past, and I wouldn’t want to mess things up with you with a misunderstanding just as we’re getting to know each other.” Remember, who pays isn’t a test, you’re not waiting to see if someone pulls out his or her wallet. And this helps make sure that the other person can afford going where you propose to meet. If someone cancels the date when they find out you’re not paying, you’re better off without that date!

Change the environment. One man complained to me about buying women drinks, because they accepted them with no intention of giving him their phone numbers. My solution to that would be, don’t buy women drinks (BAH-DUM-DUM). Seriously though, bars aren’t the only place to meet people, try meet-ups that match your interests, or cooking classes or running groups. Or a dinner club. There are plenty of ways to meet interesting people without spending anything except on your own participation. Where you go from there is up to you.

Make It About Yourself

I started several drafts of this post describing a good woman, entitlement, etc. But then I realized, when I attracted men in my life who were wrong for me, it was because there was something I needed to change in myself. I needed to work on how I was showing up in the world to change who showed up for me. And part of it was letting go of my own fears and self-protectiveness. There is no “right” way anymore. If I like something, no excuses or justification.

So if you’re frustrated with your love connections and are looking for a better way, you may want to consider what steps you may need to take to change that dynamic.

Reflect On Your History. If you’re unhappy with your current love life, what has been the common theme up until now? I didn’t really understand my own dynamics until I took a good, long look at 15 years of dating history. But once I realized what the common threads were, I (freaked out, then) resolved to make changes.

Get Clear. When people make a list for their ideal man or woman, there’s always a lot of crazy stuff on there. But if you made this list (and obviously, no one is going to see it) what do you really want? I’ve found that the people who make no apologies for what they want—regardless of how unequal, politically incorrect or insert-judgment-here it seems, they usually get it. Our happiness doesn’t follow what society currently wants to be the norm.

Go to Top
If you'd like more information like this,
be sure to check out my free Money Chakra ebook.
Don't forget to also check out my FREE
Team Delegation Planning Worksheet.