Do You DESERVE More Money?? 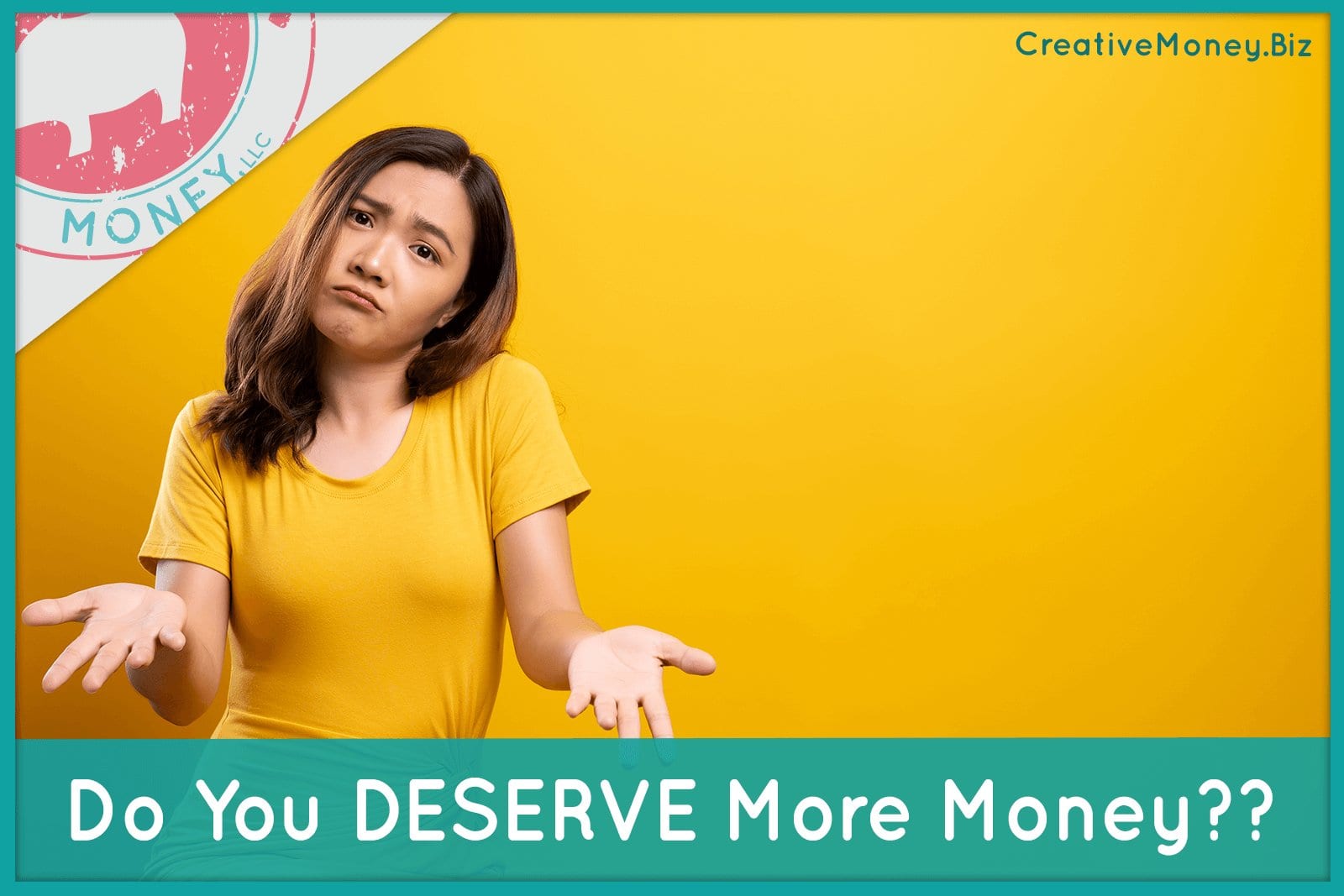 Okay, I purposefully made that blog title a little loaded…how did it feel when you read that? Were you triggered in any way? One thing that comes up when you work with people and money is that sometimes people think they don’t deserve to have all of the money they want. This might expand out to other areas of life, such as denying yourself pleasure or enjoyment, or putting others’ needs ahead of your own.

When you DO feel like you deserve to have everything you want, you sort of trust that everything will work itself out.  This doesn’t need to have anything to do with a higher power—it might for some people—but also it can be about your own personal confidence in handling whatever life throws at you. When you don’t trust in this, or don’t think you deserve to have what you want, you get caught in unhealthy dynamics and obsessive thought.

The difference between deserving vs. undeserving

When we feel undeserving, we tend to see getting what we want as a sacrifice of something else.  This might be believing that you have to sacrifice family for career success.  Or maybe you think it means sacrificing what you want in hopes of getting what you need from someone else. Fundamentally, when we feel undeserving of money, we are out of balance with giving and receiving. We’re afraid to ask for what we want because we’re afraid of what it might cost us, therefore, we settle and tolerate a situation that we’re not really happy in.

If you often feel like someone has more control over your money than you do—or stands between you and getting your needs met—then you’re probably engaging in one or more of the archetypes of survival. Here are the 5 archetypes that are most common with money issues:

In the above dynamics, you can’t help but feel resentful, because what you are giving energetically comes from a place of sacrifice instead of collaboration.  This energy of resentment mucks everything up. The bottom line is, you are enough all on your own – believe it. You don’t have to depend on anyone else.  You can collaborate with anyone, but you never need to engage in that energy of sacrifice or give up parts of yourself to achieve security.

Shifting into a more deserving mindset starts with creativity, and focusing on your possibility and potential. Sometimes, you need to clean out some of the relationship muck first.

Resolve your relationships. Where do you resent others? What unhealthy dynamics have you been engaging in? I’ve found the best way to let go of my stuff with others is to use Radical Forgiveness or The Work.  These processes help me understand what I can learn about myself from an annoying situation, and reframe the focus back on myself, so I can commit to bringing a better attitude and energy to a relationship.

Develop your own creativity. In order to feel more deserving, you need to develop an internal sense that you’re the creative source of your prosperity. I don’t think it is a coincidence that when I gave up doing theater, I started questioning my own value. Everyone has a creative outlet, and your creativity is limitless. Creativity also prevents PERFECTIONISM (another way we convince ourselves we don’t deserve).

Exist sometimes solely for personal pleasure. Nothing has helped me more with my sense of deserving than putting myself first. Some people might think that’s “selfish,” but because I have codependent tendencies, this allows me to actually balance things back toward myself instead of over giving. When you put yourself first, you have MORE to give other people.

Do you identify with one of the archetypes?  What is one step you can take to shift into a more deserving mindset around money? And if you need help with some of this, you can check out my Money Chakra workbooks in the free library – you can get access to that here.

Time to adjust or adapt?
May 4, 2022
Go to Top
If you'd like more information like this,
be sure to check out my free Money Chakra ebook.
Don't forget to also check out my FREE
Team Delegation Planning Worksheet.