Earning more money isn’t the problem with your relationship 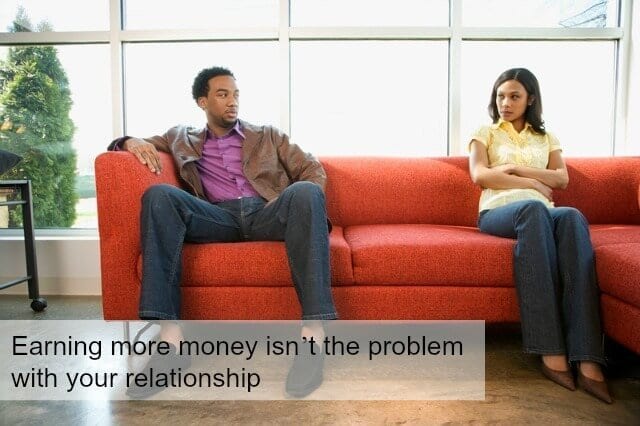 There seems to be a common misconception that relationships are failing because women are earning more money than their partners.  Or that single women who earn great incomes will never find a man.  The reality is, earning disparity has nothing to do with the real relationship problems.  It’s all about values alignment.

Here are the issues that come up most often when we hear about relationship challenges of female breadwinners:

We’re still doing most of the chores.  Studies show time and again that even when a woman works full time, she still shoulders the majority of traditional housework and errands.  But the issue here isn’t that not doing chores automatically makes the guy in the relationship a slacker; based on the statistics, clearly plenty of awesome guys still aren’t doing chores.  Maybe no one ever explicitly stated, “Whoever makes less money gets to all of the chores.” But if this were the ONLY issue a female breadwinner faced, it wouldn’t be a big deal.

Mommy guilt.  One of the biggest problems with being a female breadwinner isn’t actually about the husband; it’s that women taking time away from their children and allowing their spouses to become Mr. Mom leaves them feeling unfulfilled.  The dilemma has nothing to do with the effectiveness of their mate.  These women typically resent that they have “created” a situation where the family is dependent on their income, but this isn’t about a relationship failure (or blaming a spouse for not making more).  It’s an issue male breadwinners have faced for decades, regret over time away from their children, albeit without the guilt of violating stereotypes.

Unequal ambition.  When a woman realizes that she is in a relationship with someone who doesn’t share her ambitions, the resentment can actually destroy the relationship.  For a relationship to work, you have to value the same things.  Or, your values need to be complementary, because it’s rare to find someone with exactly the same priorities (and wouldn’t that be boring?).  Yet too often, we jump to the assumption that someone is a slacker for making less than his female breadwinner.  If the guy is in fact a slacker, he probably was already a slacker before his spouse started making more money—and she knew it.  And he would probably still be a slacker in a relationship where he made more than his partner.  But being a slacker and not prioritizing earnings growth are not the same issue.

Not motivated by same lifestyle.  I once knew a guy who broke up with his long-time girlfriend when he started making good money; he told me the reason was, she simply couldn’t afford to do all of the things he wanted to do.  At the time, I thought he was a jerk…why wasn’t he paying for her to do things with him?  What I realized, years later, was that whenever I tried to pay for vacations, ski trips or fancy dinners—the things that I wanted to do as a couple—my current partners never really appreciated or enjoyed the experience.  Sometimes, they were merely tolerating it for my sake!  Looking back, this friend of mine had tremendous foresight to understand that if his girlfriend wasn’t motivated to support and contribute to the lifestyle he aspired to, they probably wouldn’t be a good match in the long run.

Sometimes the common advice in the female breadwinning situation seems to be to “be more feminine,” or help him “be more masculine.”  Reality?  It does us no good to try and make someone feel like a man–any more than that advice would work in the opposite, to tell a man to make us feel more like a woman.  We do that for ourselves.  Why in the world would the way a couple interacts and expresses affection change just because her paycheck changed?  Solid couples simply see this as a new phase to the relationship (and usually a welcome one).

Money is simply a symptom of a larger relationship issue.  As a breadwinner, I am looking for someone who:

But guess what?  I’d be looking for these things even if I didn’t make very much money, wouldn’t I?  Relationships are built on mutual respect, appreciation, consideration and shared priorities.  So the issues that give us trouble when it comes to female breadwinning are the same issues we have with being a mature adult who understands that relationships take work, regardless of the circumstances.  As long as you both have a shared vision for your long term relationship, that hard work will pay off.

Set Your Money Boundaries
September 16, 2020
Go to Top
If you'd like more information like this,
be sure to check out my free Money Chakra ebook.
Don't forget to also check out my FREE
Team Delegation Planning Worksheet.