Time to expect more from your money 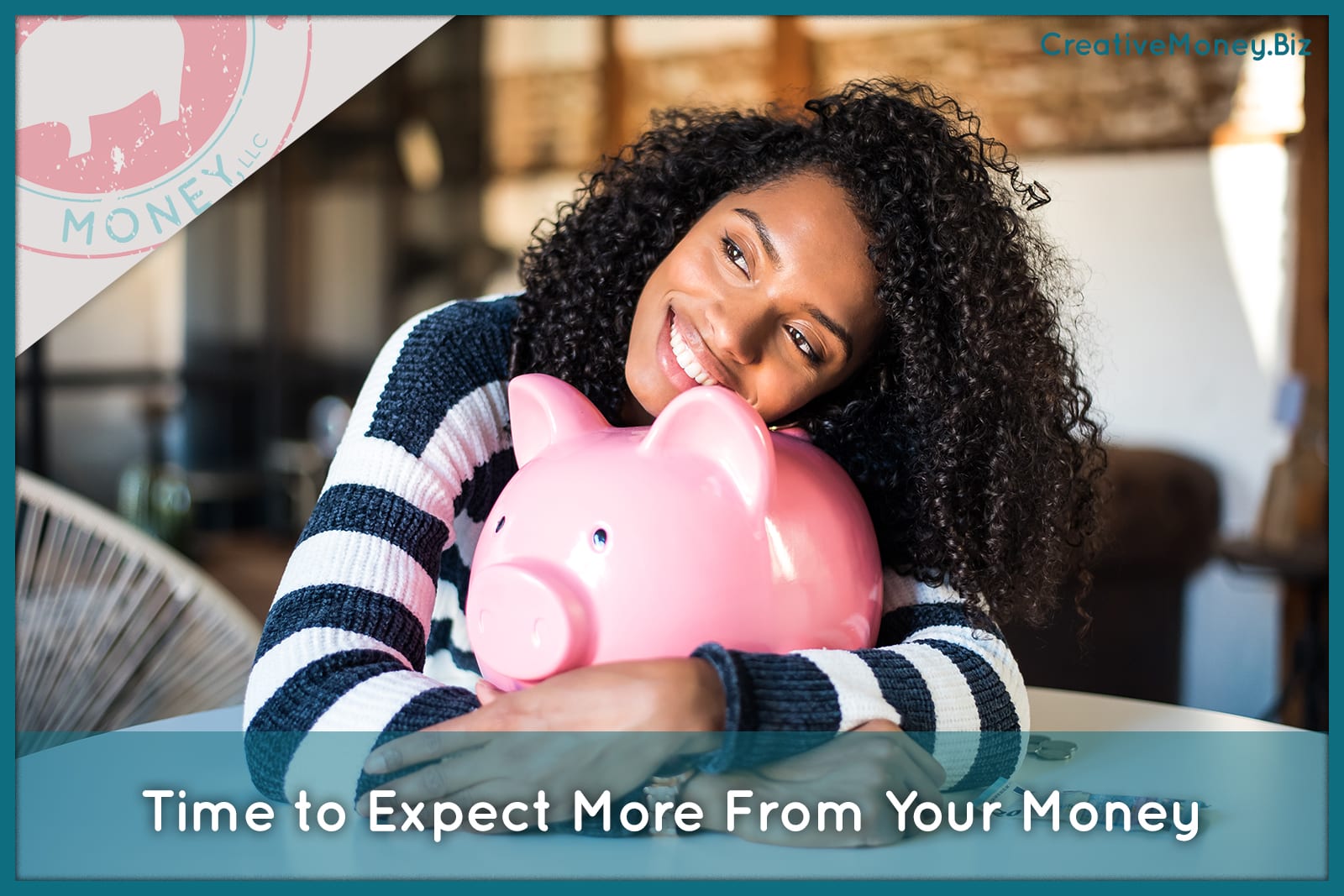 If you’ve been around these parts for any amount of time, I hope it’s clear by now that financial planning is not about products, or investments, or even about deprivation. It’s not about feeling that you need to “do” something about your money specifically; instead, it’s getting intentional about your results with money. I think the beginning of the year is a perfect time to reflect on this.

Instead of working for your money, start making your money work for you. I want to give you permission to expect more from your money. That doesn’t mean you need to invest hours and hours figuring this stuff out, it means that you get to change the way you think about your money and what’s important. And in fact, what’s important is probably none of the things you’ve been told are important to a successful financial life.

What IS important? I’ve got four things you absolutely must do to expect more from your money (and thereby GET MORE from your money). Because by changing what you expect from your money, by letting go of your traditional expectations, you change everything.

You can’t move forward with a successful money life until you make peace with your money past. Click To Tweet

1. Ground yourself in possibility, not fear.

For many people, everything to do with money comes from a place of fear and survival. If that’s you, and you are ready to expect more from your money, then we need to flip that dynamic.

Let’s say that you haaaaaate thinking about how you spend money. Or the idea of someone else knowing how you spend your money makes you cringe. Guess what you need to start doing? You need to get more comfortable with looking at the data. I had a client who resisted this SO MUCH…and all I was asking for was about 15 minutes or so per week. Not much. Finally, I just asked her to log in to Mint every day—don’t even look at it, just log in. That was finally a small enough move that she could deal with it, and it ended up changing everything for her.

When you have clarity, it opens up a world of possibility for you — it might be changing what you’re doing, or it might be that everything you’re doing is awesome and you can relax. You can have more peace of mind. A huge piece of expecting more from your money is developing your own philosophical framework to filter the data. And the symptoms of fear — judgment, guilt, grudge — have no place in it.

Have you ever heard of someone getting more done and being more successful because someone was judging them, or they were judging themselves? Quit judging yourself for where you’re at right now with your money, even if it isn’t where you want to be. (Here’s a secret: it’s never going to be exactly where you want). Where you are is fine. You have all of the possibilities in the world ahead of you.

I use the example of hopping on the scale. After the holiday season, it sucks to get on the scale and see what’s happened. Here’s the thing though… If you get on the scale after avoiding it for one, two, or three weeks… or one, two, or three months, the news isn’t good. And then you get mad at yourself for everything you did wrong, and you tell yourself a story about what was bad about how you behaved. Judge, judge, judgety-judgerson.

But that’s useless, because “what” the scale is telling you is just a data point. A number. It’s actually better if you weigh yourself every day, because then you have a better sense of cause and effect. And you start to lose the emotion around what the number says because you start to understand the relationship between your behavior, your goals, and the end result. Your money, your spending, your 401k balance is just a number. It’s the story you’re telling yourself about that number — the judgment — that is making you feel bad about it.

Once you start having more than a passing acquaintance with your financial numbers (logging into Mint for 5 minutes daily, whatever), you need to forgive the past. You can’t move forward with a successful money life until you make peace with your money past. You might have made mistakes, gone into debt, not charged enough for your services, or have given away all of your money… and that’s okay. It got you to where you are today, resolved to get started in a way that suits you better. There’s no empowerment in the past, it’s what you decide right now, and the choice you’re making at this moment. When we become aware, stop fearing, stop judging and forgive the past, we’re freed up to focus on the things that matter.

Most people don’t get excited about money in and of itself… Except for maybe coin collectors! No, most people need something that they’re going to use that money for—THEN they get excited. For so many people, personal finance is about saving into your 401k or paying down debt…and that’s sort of boring. Some people get afraid to name their vision because they are afraid that they’ll have to face up to the idea that they don’t have enough money to get what they really want.

But you know what I have discovered? The hardest part is admitting what your vision is. Once you do that, solutions start to present themselves. You’ll see that you have arranged your life to afford exactly what you hope for. Or, you’re in the process of arranging your life for your new goals.

That’s why, during the visioning process, consciousness is key. We can have everything we want in life, but the key is to be completely conscious about what those things are. I find when my clients detach from what they are “supposed” to want, and really hone in on those unique individual dreams that they have, it’s all doable. Applying consciousness to your money is absolutely key in achieving success in your vision. I once had a client whose vision was to transition to a career that didn’t take such a toll on her health. Your vision doesn’t have to be epic.

So, what are you trying to do?

If you’re confused about what you want your money to be doing for you, start by asking, how do you see yourself in your vision? How is the YOU right now aligning with your vision of the future?

This is a permission point. This is permission to have a bigger vision for yourself even if you feel like you have no money. Permission that regardless of how much you have right now, you can expect more and have the money coming in work harder for you. And I want to challenge you right now to write down one thing. What is one thing you want? What’s one thing that’s fallen by the wayside because life got in the way?

The problem with personal finance is, it’s hard to get inspired by it. Sort of like exercise; I have to focus on the feeling after the workout to get inspired to exercise. You have to take action to get the inspiration.

Taking ation might be figuring out all of the things involved in getting to your vision, or researching options and what they cost. It might be tracking your spending more closely (yes, millionaires track their spending). And it’s hard to feel inspired or expect more from your money when you have money experts telling you you’re doing it wrong. If you don’t fit some guidelines for what is the “right” way to organize your money, you feel like you have to opt-out. Who cares if you have 6 months of expenses for emergency funds? Start with one month; one month is more than what 70% of Americans have.

It’s more about the small actions you take and not the big financial “win.” What people need to understand is that personal finance is sort of like a video game; you need to win enough points at the lower level to make it to the next one. You experiment, you work out a game plan based on success AND mistakes. You just need to focus on the next step while keeping the big picture in mind.

People become overwhelmed because where you are now and that big vision seem so far away from each other—but that doesn’t matter. And you might not even know all 27 steps you need to take to get from here to there, and that’s okay. Expecting more from your money isn’t about an elaborately detailed plan from now for the next 5-10-20 years, it’s about awareness and course navigation. You can map the route, but you’re always going to need to adjust and adapt.

Do You Have Financial FOMO?
October 14, 2020
Go to Top
If you'd like more information like this,
be sure to check out my free Money Chakra ebook.
Don't forget to also check out my FREE
Team Delegation Planning Worksheet.