Have financial problems? Do this… 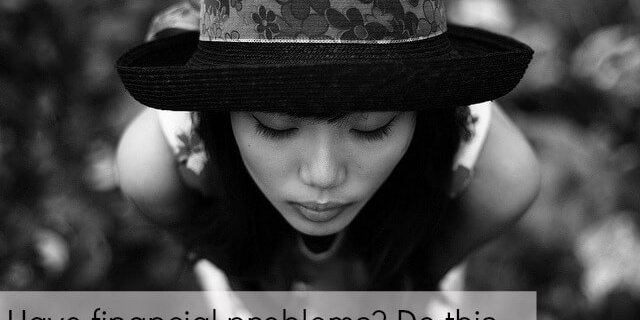 I’ve been watching this awesome new sitcom this fall called Mom. It stars Anna Faris and Allison Janney, and the premise is they are mother and daughter—-both recovering addicts—-going through all of the challenges that addicts generally face when working through sobriety. In case it doesn’t sound like it, let me tell you, they are hilarious.

A few weeks ago, Anna Faris’s character Christy had to deal with her car breaking down.

She had been trying so hard to think positive, to feel like she was the source of her life and all of the other things that you tell yourself you’re supposed to be thinking when life hands you lemons. But she didn’t have the money to fix her car.

She asked her mother Bonnie (Allison Janney) to borrow money, and Bonnie didn’t have the money either, but offered to move in with Christy to save on expenses. So now Christy had not just the challenge of figuring out how to afford her car repairs, but also the choice of whether or not it was worth living with her narcissistic mother to get there faster.

Then at her AA meeting, Christy meets a woman named Regina who is sobbing in the back of the room. Regina tries to leave, believing because she had a fantastic job and all of the trappings of success, that it was a mistake to show up at the AA meeting. But Christy reassures her that she is in the right place and that Christy can help her. So Christy takes Regina home, helps her dump all of her booze and drugs (that she had been carrying with her) and gives Regina a place to sleep for the night.

Later that night, Regina comes to Christy’s room and thanks her…Regina decides that yes, she probably has a substance abuse problem, and it probably started around the time she started embezzling millions of dollars from her clients. Her actual, “real” problem.

At that moment, Christy has an epiphany; she said, “Oh my god, I am SO happy that my biggest problem right now is paying for car repairs!”

This is what I love about this sitcom; it’s always really funny, but also, as Christy makes her way through the lessons of sobriety, there are plenty of lessons there that apply to people who don’t have substance abuse problems.

So when you’re struggling with financial problems, I encourage you to be happy about the problems you’re facing. They are figure-out-able. With our western-world privilege and our tendency to compare, it’s easy to miss how great we have it, especially when money is the only thing temporarily challenging us. So, be happy…

Be happy that you aren’t dealing with addiction.

Be happy you aren’t challenged by a debilitating illness or condition.

Be happy you feel physically safe and know the people around you never want to hurt you.

Be happy you know where you’re sleeping tonight.

Be happy that this current issue or problem is an opportunity to reinvent yourself.

Be happy that you have the freedom to endlessly reinvent yourself.

Be happy you have a choice.

This will close in 0 seconds

If you'd like more information like this,
be sure to check out my free Money Chakra ebook.
Don't forget to also check out my FREE
Team Delegation Planning Worksheet.