Skipping A Latte Will Not Fix Your Money Issues 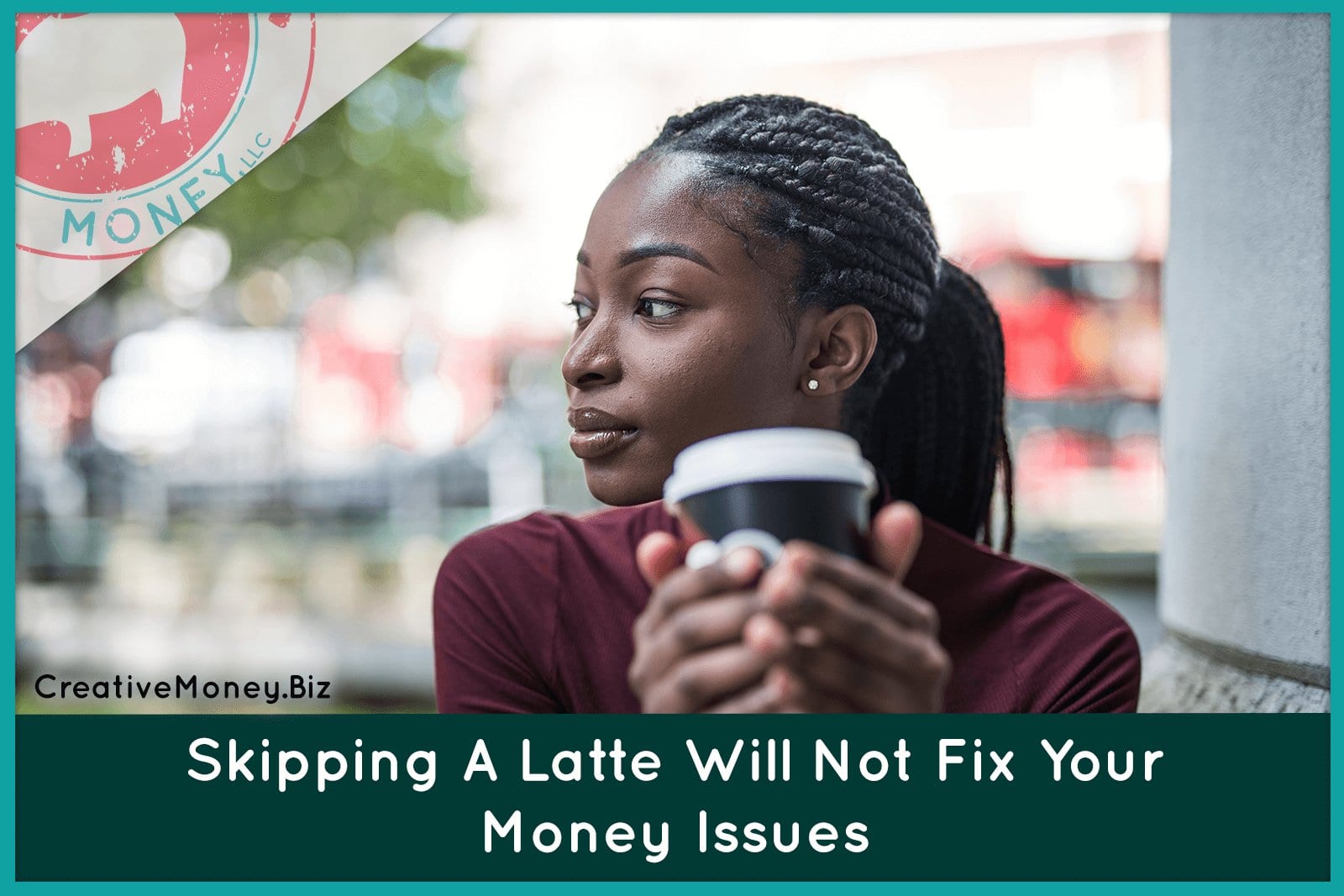 Traditional money advice sometimes bugs the crap out of me.

Articles about money by so-called money experts often come up with these inane little suggestions that are supposed to help you get control of your money.  My favorite is the idea that skipping your daily or weekly latte (every money advisor’s favorite analogy) will have a monumental impact on your finances.

Sure.  Let’s say you get a $4 latte every weekday. That’s $20 a week, $80 a month, almost $1,000 a year.  And yes, putting that towards your credit card debt or retirement savings would add up over time. Seems like an easy fix, right? But what if you look forward to that latte every single day? What if sitting down to drink that coffee is your moment of mindfulness and bliss before you start your workday? What if it’s your 3:00 PM treat to help you get through the day? What if it’s your time to chat with friends for a few minutes? What if you don’t have the “willpower” to give it up? Does that mean you’re doomed to stay in debt and work forever?

Of course not. It just means that particular advice doesn’t fit your situation. The idea that you can just “spend less and earn more” to solve all your money woes is about as helpful as telling someone that they can “eat less and move more” to lose weight — technically, they’re both absolutely true, but wouldn’t you already be doing those things if it were as easy as all that?

The idea that you can just “spend less and earn more” to solve all your money woes is about as helpful as telling someone that they can “eat less and move more” to lose weight. Click To Tweet

The general money advice you can take to the bank

That’s why most general money advice you’ll find lying around is pretty crap.  It doesn’t take your personal circumstances into account, nor does it create any kind of conscious spending plan that leaves you feeling happy and fulfilled instead of grumpy and resentful every time you drive past a Starbucks. That’s because, I believe, nearly every money issue you come up against isn’t about the money. It’s about your energy and the emotional baggage you’re bringing with you to every interaction with money.

So, what do you do if giving up lattes isn’t the answer? Here’s my best general advice for cleaning up your money energy and mindset:

Take responsibility for your own energy.

Here’s the thing: your money issues aren’t your parents’ fault.  It’s not your boss’ fault.  And it’s not the economy. Your energy, your issues, your mindset that you bring to your interactions with your money — that’s on you. In fact, playing the blame game just drains energy away from you.

I grew up in a codependent family. I learned codependency from watching my parents and other family members interact. And because of that, I used money as a tool to try to “fix” other people when I grew up and had some of my own. That’s a BIG whopper of a money mindset problem — and it’s mine, all mine. Just because my family was key in shaping that aspect of my life doesn’t mean I get to blame it on them. I have to be responsible for my own energy, and so do you. Because your parents/family/boss/friends/partner/the economy can’t change your mindset for you. Only you can do that.

Here’s a scary fact: you’re never done with your money mindset work. You’re just not. Old stuff gets resolved for a while, then pops back up again when you least expect it. You bust through one energy block only to find another, even bigger, one waiting for you on the other side.  You move eight steps forward until something sends you six steps back. Your money mindset is a moving target, and you have to keep going.

I picture it like a spiral staircase. It may feel like you’re going around in circles, but actually, you’re making progress. You must acknowledge and accept that you’re never going to be perfect. But you can commit to always working on your energy and mindset to keep making progress and keep moving forward.

Work on self forgiveness

I’m going to tell you a big secret: we’ve all made mistakes.  We’ve all made poor decisions that have come back to bite us in the booty. It doesn’t matter what’s in your past — bankruptcy, massive amounts of debt, bad investments, poor choices — it’s in the past. We can’t change the past.  We have to release the past so it loses its power over us. If we continue to dwell on the past mistakes we’ve made, how can we ever shift that energy and move forward?

Sometimes I think people tend to self-flagellate with memories of their money misdeeds in an attempt to prevent themselves from making the same mistake, but that rarely works. Fear doesn’t make good choices. The only thing that I’ve found that truly works to help prevent you from reliving those same mistakes again and again is making peace with them. Forgiving them. Believe me: forgiving does not mean you forget. It simply means that you can move forward without the shame.

Finally, a bonus fourth thing you must do is take action. If you don’t, you will be doomed to repeat yourself. Stop looking for the quick fix that looks like a year of skipped lattes and instead buy yourself a cup, sit down, and do some of the hard work required to look at the mindset and energies that really brought yourself to this place.

Then enjoy that coffee with my blessings.

Save Money AND Do The Holidays RIGHT
December 4, 2019
Go to Top
If you'd like more information like this,
be sure to check out my free Money Chakra ebook.
Don't forget to also check out my FREE
Team Delegation Planning Worksheet.