How to give yourself a raise 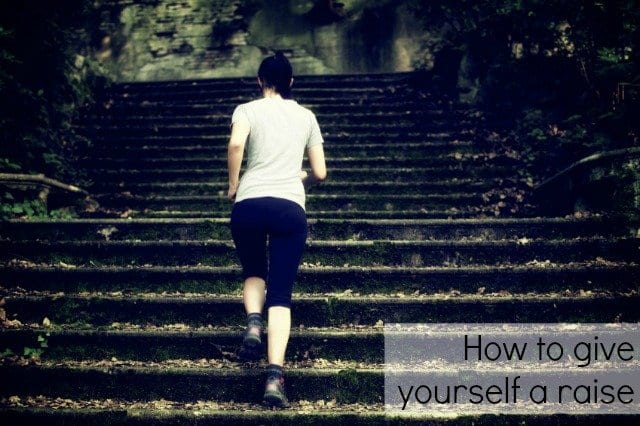 The most important aspect of money is maximizing your income through your career or self employment. I see all-too-frequently people who are not being clear about the value they bring to their work—which ultimately hurts their entire financial situation. It’s important that you make the connection between how you talk about yourself and how it affects income. Until this happens, you’re never going to get a raise that satisfies you.

I recently had coffee with an existing client named Amy who is looking for a new job. Amy was feeling a little lost about what sort of position she should apply for…she was a long-time employee of a photography studio, growing with the business over several years.

I saw her as director of operations, marketing, client relations and project management. Amy ran the business with minimal input from the owner. But her resume didn’t reflect that…and I got the impression that her former employer never really acknowledged just how much Amy did for the business—which is pretty typical of many employers. But from what I knew about the situation, I knew it would take about 3-4 people to replace Amy when she left.

The issue was, Amy didn’t own her value. Like many of us, Amy thought that if she was valuable, her employers would have told her that. They would have given her the appropriate title and compensation. Amy knew she was running the business, but since she still answered to the owners, she felt like an assistant. So when crafting her resume, she undercut herself by playing small.

3 Areas That Affect Our Raise

I usually see three areas where people mess up when applying for a job and/or asking for more money from an existing employer:

You don’t acknowledge how valuable you really are. When you’re just plugging away at a job, you keep taking on more responsibility, getting better and becoming an expert at your own corner of the working world. But you didn’t notice it was happening! Titles generally don’t keep up with expertise. So when it’s time for a raise, you forget to point out the progress you made or all of the things you accomplished.

And with new positions, your success has nothing to do with your software knowledge or where you went to school and everything to do with your understanding of the systems associated with your field and WHO YOU ARE. When I was an employee, I was always more valuable than my colleagues because I jumped in and solve problems very quickly. Software and other programs can be learned, but your character is your main differentiator and value.

You underplay the language you use to describe your value. It’s hard to work all year with a team of people, use the language of collaboration and then turn around and summarize your accomplishments as an individual. It can feel very self serving. But you have to remind yourself that the success of the team depends on you feeling good about the compensation you receive for your efforts, and you’re the only one who knows what works for you. So you have to become comfortable with the language of personal accomplishment, and talk in powerful, active verbs. If you’re stuck, ask someone who admires you to describe your accomplishments.

Girls are (still) socially conditioned to get compliments by disparaging themselves. Have you ever heard a girl say, “Ugh, I look awful today!” and you or another friend answer, “No way, you look awesome, and I LOVE your hair like that…” or something else. But if you do that in the workplace, your supervisor might think, “Hmm, if she’s so down on herself maybe she doesn’t deserve a raise.”

You might be a hard worker, have a serious work ethic and be results driven. But everyone says that. What differentiates you from 20 other “good” employees? PASSION. You have a unique way of looking at things and an innate curiosity that makes your questions, opinions and input invaluable. It’s up to you to figure out what those are and talk about them in a way that helps you stand out from the crowd.

You shoot for the job you KNOW you can do versus the “scary” job. In my example with Amy, if her employer had advertized her position the way it actually played out, Amy probably never would have applied for it, because she didn’t feel like she was capable of running a studio. But she was. It snuck up on her.

Most people are afraid of applying for a job that seems bigger than where they are at because they don’t want to fail. But every new job has a learning curve associated with it, and everything is knowable. A position might seem scary because of the uppity words in the job description, when in reality, it’s totally doable.

I was talking to another client who described a new employee in her office; this guy was asking questions all of the time, and based on the questions, she just knew that he was under-qualified for the position, but he somehow had been hired. But the way he hustled, she thought he would be up to speed in about 90 days. So it didn’t bother her, other than how much more confident he was in himself than she would have been in his situation!

If you can relate to this, you might like my free ebook, Money Chakra, which starts to help people understand how their attitudes and energy affect their money decisions – you can get that here.

Go to Top
If you'd like more information like this,
be sure to check out my free Money Chakra ebook.
Don't forget to also check out my FREE
Team Delegation Planning Worksheet.