What’s Your Excuse For Not Keeping on Top of Good Financial Habits? 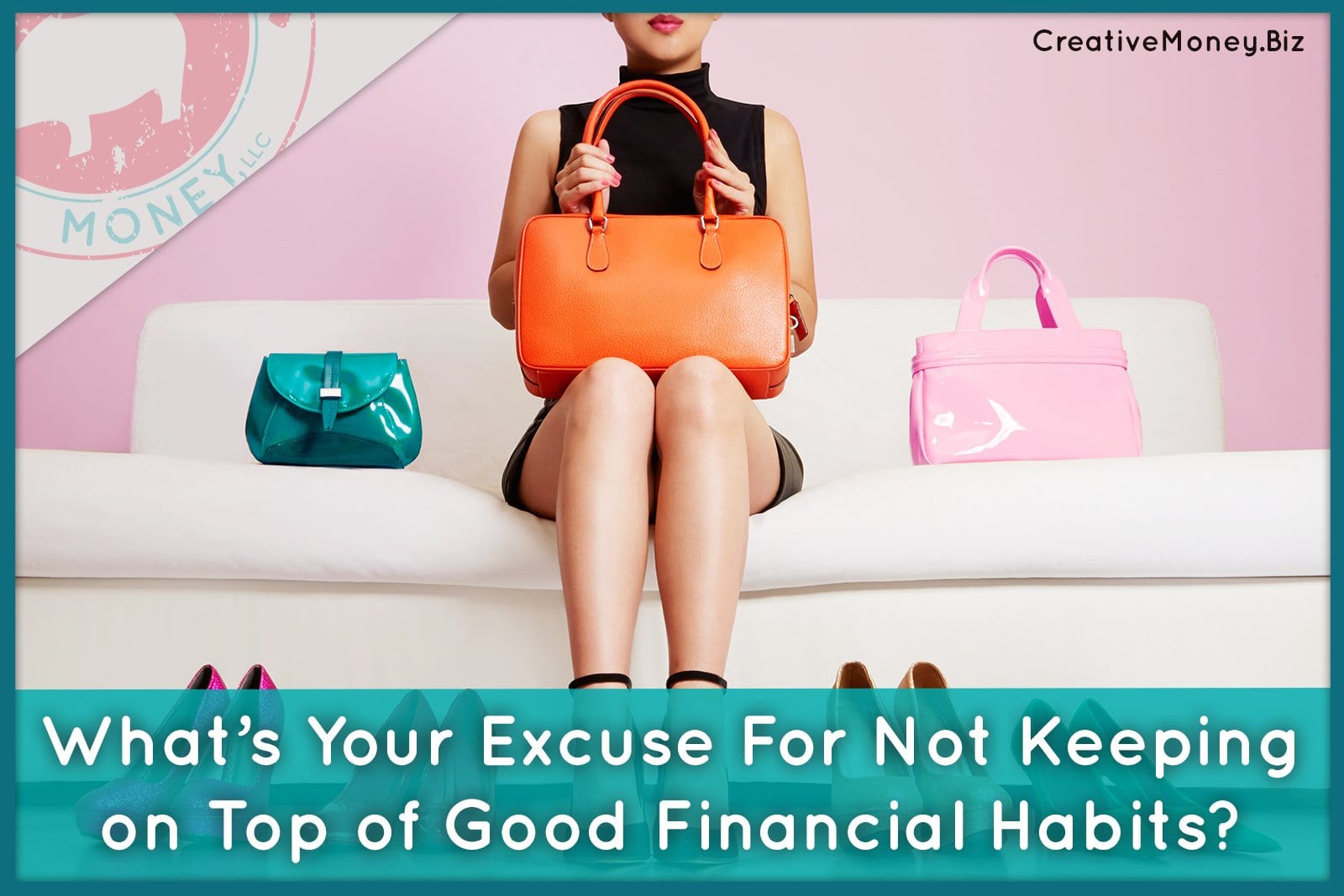 Sometimes certain people are just dealt a better set of financial circumstances… rich parents, whatever… but most financial success – of saving and keeping money – has to do with good financial habits. Bad financial habits can be as difficult to break as any addiction or other bad habit. Yet some people can change their habits quite quickly and effectively. Do those people just have more willpower?  Are they smarter?  Are they somehow better than the rest of us? I suspect not.  I’ve been reading Gretchen Rubin’s book, Better Than Before, which is all about habits, and she points out that there are really only a few ways that people change their habits:

The first is hard to manufacture. It’s the kind of thing that happens pretty rarely, and usually as the result of a big life event. So that’s usually out. The second can be difficult when it comes to finances. Some people do things like freeze their credit cards to curb spending, but for the most part, we can’t go cold turkey with money. So that leaves the third one.

Rubin argues that one great way to make baby steps towards change is to recognize when we’re making excuses.  She calls these excuses loopholes, because like loopholes in a contract, they give us a way to get out of living up to our new habits.

This is the loophole you invoke when you think you can’t have two things; I see a lot of people who think they can’t make lots of money AND have lots of freedom.  Or you can’t pay down debt AND have fun.  Or that you can’t get organized with money because you’re too busy with a new baby, new job, etc.

Instead, ask yourself: “Can I have this AND that?” or “Can I do this AT SOME LEVEL while maintaining my focus on my short-term priority?”  It’s surprising how often that’s possible. This is the key tenant in my conscious spending plans. I never ask my clients to give up the things that bring them the most joy in life. Instead, we try to find ways to keep the things that are important to them, while cutting back in places that are less important.

One-coin loophole – “What difference does it make if I break my habit this one time?”

One of the most insidious of loopholes is the “one-coin loophole”— because it’s absolutely true. This loophole gets its name from “the argument of the growing heap,” in Erasmus’s Praise of Folly.  To summarize, this story highlights a paradox that’s very significant: often, when we consider our actions, it’s clear that any one instance of an action is almost meaningless, yet at the same time, a sum of those actions is very meaningful.  Whether we focus on the single coin, or the growing heap, that focus will shape our behavior. True, any one visit to the gym is inconsequential, but the habit of going to the gym is invaluable.

When we consider our actions, it’s clear that any one instance of an action is almost meaningless, yet at the same time, a sum of those actions is very meaningful. Click To Tweet

People often use this against you!  My dad is aware that I recommitted to daily exercise and eating healthy at the start of the year, yet even when I asked him NOT to send his usual round of Valentine’s Day treats, he did anyway and excused himself by saying, “You have such great discipline, I know you won’t go crazy and eat them all at once.” (He is so wrong…).

“This doesn’t count” could easily be replaced by “I’m on vacation” or “It’s the weekend” or “It’s for my kids.” We tell ourselves that for some reason, this particular circumstance doesn’t “count” — but in fact, while we can always mindfully choose to make an exception to our habits, there are no magical freebies.

I often see this come up with clients when they’re trying to break a bad spending habit.  Say, for example, they have a habit of buying lunch out every day, or a big stack of books at the end of the week, or a pair of expensive shoes every time they’re feeling down.  Even if their intention is to give up these spending habits, they’ll rationalize a slip up by saying it doesn’t count for some reason. Unfortunately, everything counts, and it’s the same money being spent whether you’ve had a bad day, did something good and “deserve” a treat, or your kids are begging for it.

Knowing your loopholes can help you close them

Once you know which loophole your subconscious brain is likely to use to try to rationalize an old habit or poor choice, you become instantly more aware of them. I found, in reading about the loopholes, I became more aware when I was using them in my own life. It disrupts the automatic nature of the habit, and allows you that moment to question — is that really true? That momentary disruption is all you need to start breaking those habits that aren’t helpful, and replacing them with new, better ones.If you want more information on this, I highly recommend checking out Rubin’s book, or downloading my free Chief Initiative workbook that helps people get super clear about their #1 money priorities and what they actually want to change habits around.