How To Make The Holiday More Meaningful 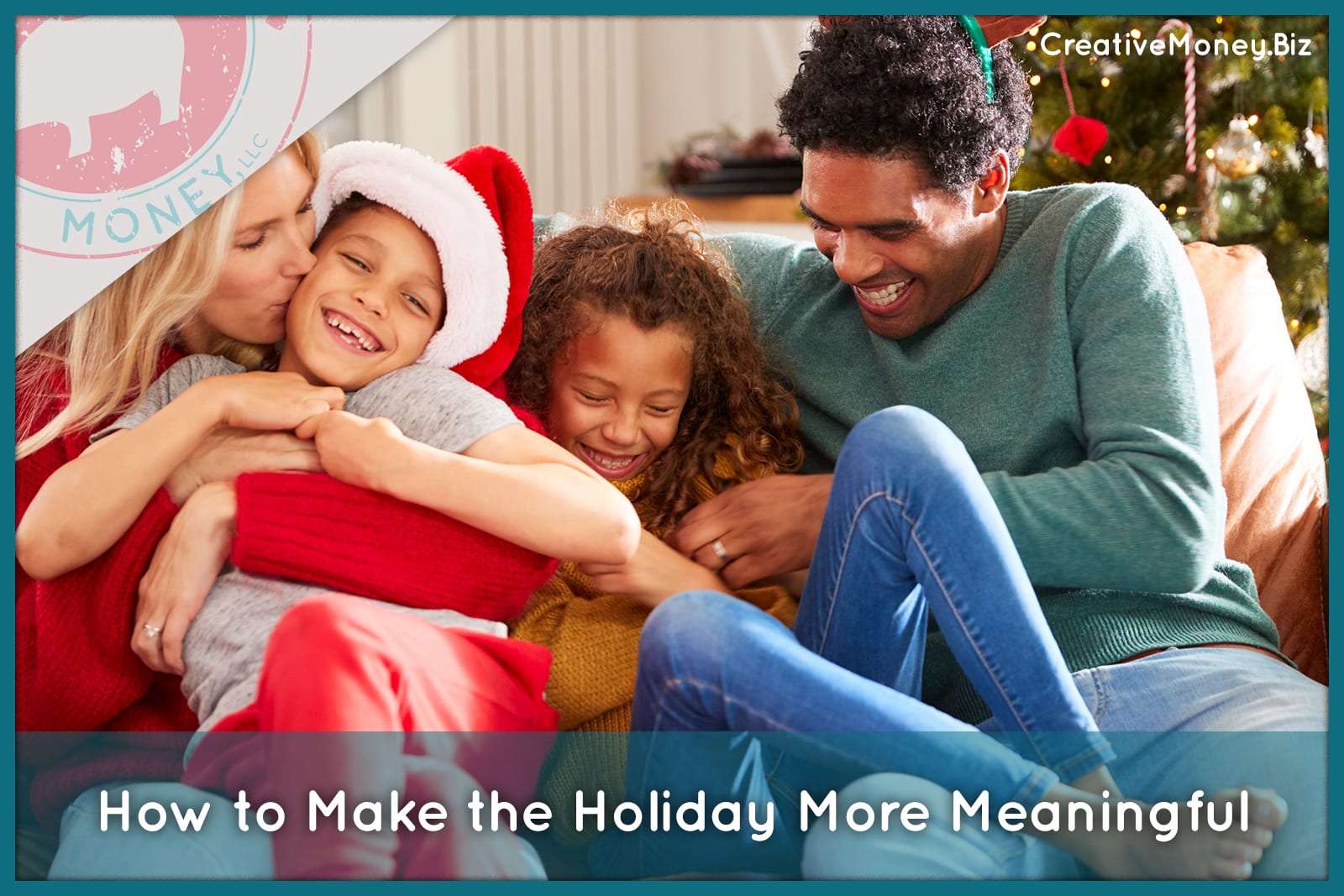 How many times have you sat around the day after Christmas and vowed that next year — next year — you aren’t going to go so far overboard with STUFF… that you will scale back on gifts? Maybe you felt empty last year, even in the face of all of that abundance. Maybe it’s the environmental guilt you see at the trash, bags full of wrapping and packaging out by the curb. Maybe it’s the melt-down the kids have from too much holiday. Maybe it’s the financial hangover that comes around January 2nd or 3rd.  Whatever the catalyst…

True story: my family hasn’t given holiday gifts to each other for years. When we stopped, the holidays went from stressful and expensive to a time when we could relax. Of course, when we decided this, there were no small children to consider in our immediate family, and kids may be where you decide to cut back, or establish an intentional policy, instead of eliminating gifts completely.  Someone asked me how we got to that point—how did we have the conversation that initiated the change so we no longer gave gifts to each other?

The Holiday Review: Your Starting Point

My mom and I, when she was alive, had an informal process that we went through before and after the holiday season to make sure we captured all of the best aspects of that season and made sure never to repeat the worst aspects. For the past nine years, I have done this by myself and forced the rest of my family to do it (they like it now). At the start of every holiday season — usually Thanksgiving — we pull out the prior year’s Holiday Review List and we all read through it together. We make a list together of must-haves and must-not-haves. This is crucial because what we discovered when we started doing this was that there were “traditions” that nobody liked and were causing a lot of stress (like gift-giving in this case) that could be done away with. Here’s a typical Crary family list:

Fun Things We Did

Things Never to Do Again

Things That Stressed Us Out

You get the idea. Every year, we review the prior season, so we can make sure we NEVER repeat the bad stuff just because we forgot! Then we make a new plan each year to incorporate the good stuff. This meant that when I proposed that we eliminate holiday gifts, I had evidence that my mom was getting stressed out by the holiday crowds and that my dad hated gathering and recycling all of the discarded gift-wrapping materials. I was able to elicit comments like, “It’s getting harder to shop for you, the older you get.” I could also remind them of how much fun we had just hanging out together and point out that the best memories were experiences, not specific holiday gifts we received.

What NOT to Focus On

Like anything in life, it’s better to propose a change by accentuating the positive benefits that will come, instead of the negative — here are three attitudes that typically cause people to resist giving up the gifts:

Remember that this has to work for your situation and your family. If someone in your family really does get a holiday buzz from playing Santa, you’re going to have to respect that and learn to live with it. If you find resistance to your no-gift holiday plan, or if there is someone who really loves giving gifts, here are some potential compromises or solutions:

The very best thing you can do here is to find a solution that fits with how you want to act and feel — individually and as a family! It might be worth doing a simplified version of my Chief Initiative exercise (which you can find in the library) during your family meeting to help identify what everyone really values. Then you can explore the best roads to get there.

Are You a Co-Dependent Spender?
November 11, 2020
Go to Top
If you'd like more information like this,
be sure to check out my free Money Chakra ebook.
Don't forget to also check out my FREE
Team Delegation Planning Worksheet.