How addiction can help you make better money decisions 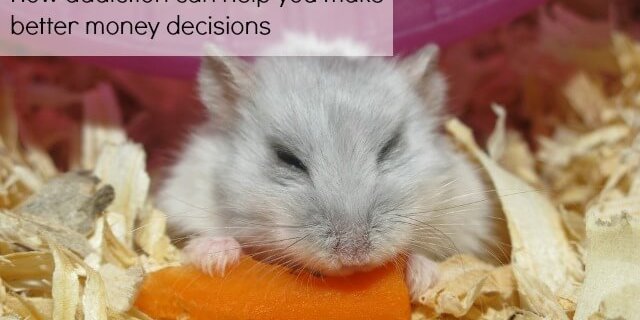 What do your spending habits reveal about you?  Often, we use money to avoid a negative consequence (I don’t want to be bored, lonely, sad, etc.).  It might be stretch to say we’re addicted to the way we spend money, however, you might be surprised that the key to making better money decisions lies in solving an addiction.

In Martha Beck’s book, Finding Your Own North Star, she has this great story: after the Vietnamese War, a psychologist named Bruce Alexander set out to understand why many veterans who had taken drugs in southeast Asia simply stopped using without much fanfare after they returned home. At the same time, many researchers were doing experiments on lab rats showing that drugs like heroin and morphine were spectacularly addictive. In labs all over the science lab world, rodents were being introduced to levers that flooded their blood with opiates. Virtually all these rats became hardcore addicts.

After reading many studies of junkie rats, Alexander noticed that the animals had something in common other than drug addiction: they were all being kept in cages. Now rats, which have a nervous system a good deal like ours, don’t like cages; they like tunnels and burrows, room to roam, and time to spend making friends and appreciating nature. So Alexander and his colleagues decided to test the effect of environment on drug use by creating a rodent paradise. They built a zoo-like space filled with items and spaces rodents were sure to appreciate. They called this fabulous place Rat Park.

Their group then took two groups of rats, one lodged in ordinary cages, the others rambling through Rat Park, and offered them a choice of plain water or sugar water laced with morphine. The caged rats went for the morphine immediately and were soon acting addicted. The park-dwelling rats, however, preferred plain water.

No matter how much sugar Alexander added to the drugged water, the park rats wouldn’t drink much of it.  Only when we he added another drug, nexalone, which eliminates the intoxicating effects of morphine, did the park rats go for the syrupy morphine water. In other words, the rats were actively avoiding the effects of morphine even though they love the taste of sugary water. They didn’t like getting high. When Alexander took caged rats, gave them nothing but morphine water until they were fully addicted to it, and then plunged them in rat paradise and gave them a choice of water that was either pure or laced with morphine, they still decreased their consumption of drugged water, even though that caused them to go through withdrawal.

When I had a traditional practice, I was sick and miserable.  It took me a long time to realize it, because I could use money to compensate; I spent more because I felt like I “deserved” it after working so hard—and you could say that I was “addicted” to my little treats.  But once I read about Rat Park, I started to rearrange my life.  And the more peaceful I felt with my life choices—and the more I focused on making decisions to support my happiness–the more I simply stopped buying all of the stuff.

I don’t want anyone to think that you have to compromise on lifestyle—because that’s immediately where everyone goes (the mentality of “I can’t have it all”).  I don’t make any less money; I just am wealthier on the other side of it.  The point is, do what makes you happier FIRST, and you need fewer of the outward trappings.  You become less attached and “addicted” to the things you think you need in your life.

I think the questions we all need to ask ourselves are:

What’s my version of Rat Park?

How far off am I from it…and what can I do to close the gap?

P.S.  Do you want some help in mapping out your own Rat Park?  Join me here.