How is your locus of control messing with your money? 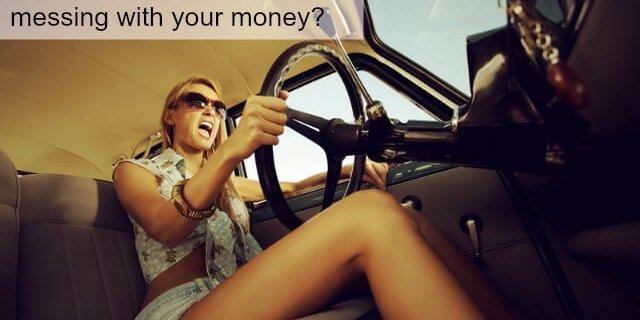 Do you think your money situation is a result of your circumstances, or instead, a result of your actions and behaviors?  Your answer to that question is likely to predict your progress to wealth, your earning power, work satisfaction, stress levels, and how high you’re likely to go when you set a goal for yourself.

Within psychology, Locus of Control is considered to be an important aspect of personality.  The concept was developed originally Julian Rotter in the 1950s.  Locus of Control refers to an individual’s perception about the underlying main causes of events in his/her life.  Or, more simply:

Do you believe that your destiny is controlled by by external forces (such as fate, god, or powerful others)?

External Locus of Control – Individual believes that his/her behavior is guided by fate, luck, or other external circumstances:  “I’m late today because traffic was horrible!”

Is an internal locus of control desirable? In general, it seems to be healthy to perceive that one has control over those things which one is capable of influencing.  Research has found the following trends:

Externals can lead easy-going, relaxed, happy lives—because they perceive no direct influence over their world, they are content to “ride the wave” where ever it might take them.  Overall, however, research has found that people with a more internal locus of control seem to be better off.

You can probably see by now that those with an internal locus of control are more likely to have success with money.  But there is good news; you can develop your internal locus over time.  Here’s how:

Accept this premise: You always have a choice.  It might not be a great one, but there is ALWAYS a choice.  You’re not trapped or locked into one action.

Brainstorm alternatives.  Write without evaluation, and enlist the help of someone who can help identify options without telling you what to do.  Get all options on the table before deciding on a course of action.

Practice.  Try this with low value issues first (like what route to take to work) to develop the “options” muscle.

Notice self talk. If you tend to speak in absolutes, stop. Listen to how often you comment negatively versus positively. Phase out phrases like, “I have no choice” and “I can’t…” Rephrase when you catch yourself with “I choose not to,” or, “I don’t like my choices, but I will…”

Your attitude affects your stress level more than you may realize.  You might even want to go through all of the different aspects of money (savings, debt, investing, earning) and see if your Locus changes with the area.  You’ll realize the more you work on this, the more empowered you feel in all areas of your financial life.

P.S.  Want some help with this?  Get started with my Chief Initiative workbook – you can download that here.