How To Deal With A Control Freak 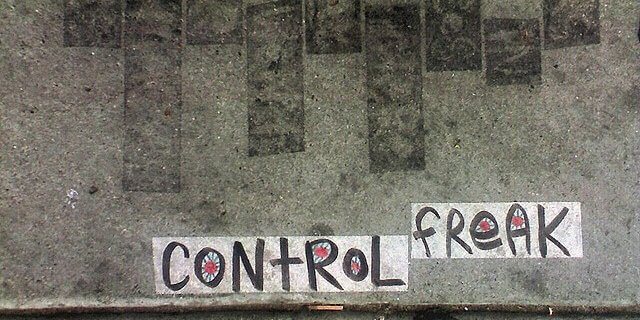 I have never tried to hide the fact that I am a recovering control freak and codependent. However, if you had TOLD me that was what I was doing at the time, I would have been shocked—I simply saw myself as the person who knew best.

When I finally saw that I was actually the person responsible for screwing up relationships—even though I have mentioned in past articles that I consider myself a benign controller—I gave up my bad habits. I saw that there is no possible way for me to “know what’s best” because it changes for every person. But I never would have gotten there without supportive friends and loved ones who knew how to deal with me!

How did I become a control freak? I’m not sure. People typically control others when their feelings are blocked. For example: A young boy falls down and cries, to which the father responds, “You’re not hurt; stop crying.” The father is denying the boy’s reality—and the boy realizes he can’t trust his feelings to know what’s real. That’s when he starts to depend on the outside world to define reality.

Control freaks create their self-image based on outer-world standards because they perceive their inner world as unreliable. Control freaks try to define another person’s reality in order to “help” them maintain their own outer-world defined, perfect image. But a lot of them don’t even realize they do it, and this is an opportunity to break the cycle.

How To Identify A Control Freak

Whether they realize they are doing it or not, controllers all share some specific characteristics:

One Mind. Controlling people think you’re plugged into the same “ideal” persona, situation or relationship that they hold in their own mind. As long as you go along with whatever they imagine, things work, but when the “perfect” spouse or child can’t guess what the controller needs, they become angry. The codependent person might play into this too, and TRY to guess, to fulfill the role.

Defining Others. Controlling people define you based on an ideal. Authenticity is neglected, because feelings are notoriously unreliable for them. So what a loved one really feels and thinks is replaced by the controlling person’s definition to TRY to pull the victim back into the perfect persona. You can see this in the following situations in which Donald is defined by Marie:

Marie invalidates Donald’s reality and tries to get him back “on track” by redirecting him. Marie is trying to show Donald that she knows him better than he knows himself—which in her mind is a GOOD thing. Marie completely misses the fact that she is being presented with an opportunity to know the REAL Donald.

Dealing With A Control Freak

Once controllers understand what is happening, they will see all kinds of examples of how they choose “perfect” over “authentic.” Many controllers can’t take back that awareness when they see it, and they start to recover in spite of themselves.

But some controllers don’t understand or will never be aware. I previously mentioned my father is a benign controller, who I do not expect to change. I don’t mind; I don’t live with him, so our relationship isn’t served by pointing out his behavior (and his other relationships are none of my business). So as the potential “controllee,” in our relationship, I simply use some strategies to deal:

Choose My Battles. I let my dad choose when to visit and the details around that. I make suggestions, and let him decide what to incorporate. You know what? It’s NICE sometimes to have someone completely take over and not have to think about every detail. Say what you want, but the control freak usually knows how to show you a good time!

Paint A Picture. Help them shape that ideal scenario and give them a venue to explain their vision to you. “You know what would be really wonderful? If we did X . . . what do you think?“ and then you both get to discuss and collaborate on the ideal together.

Point Out The Anger. If my dad starts to act angry—most likely I am not playing to his ideal–I’ll ask, “Are you angry about something? Because I don’t know what just happened. If you tell me, we can fix it.” He’ll usually say no, but then he’ll calm down and realize he was getting angry all on his own.

Use Humor. When I know my dad has an “ideal scenario” coming up (like taking certain routes to restaurants), I look for ways to defuse the control attempt by surprising him. Or, he keeps a To-Do list in his shirt pocket at all times—so I’ll sidle up to him, take it out and say, “Hmm, THAT’s not on the list!” It’s probably codependent of me to anticipate the control and be able to read my dad as well as I do. Oh well.

Redirect The Control. I ask dad for help on stuff all of the time. He’s still one of the most resourceful and intelligent people I know, within the boundaries of his expertise. As long as I respect and call on his expertise in the areas where he excels, we all win. I’ll say, “Yeah, X (whatever he was commenting on) is an issue, but you know where I could really use your help/opinion/input is ________.”

Don’t Try to Out Argue. Just say, “You might be right about that.” And then go do whatever you want anyway. Just because the controller couches his argument in “logic” doesn’t mean you have to respond logically. Or, respond at all. Sometimes a well-placed, “Hmm . . .” is all you really need.

Thank goodness I have loved ones who never judged me or gave up on me when I tried to control them! On the other side of it, I learned that I DESERVE the love, esteem and affection that they give to me—I just couldn’t FEEL it until I chose to give up control. And between the choice to stand alone as the authority who has all of the answers, and to be imperfect, vulnerable and supported, there is absolutely no contest . . . we control freaks just need help getting started!

P.S. The major way I brought about change was to work on the energy I was bring to my life.  You can download the free ebook that addresses all of that right here.