How to deal with financial failure 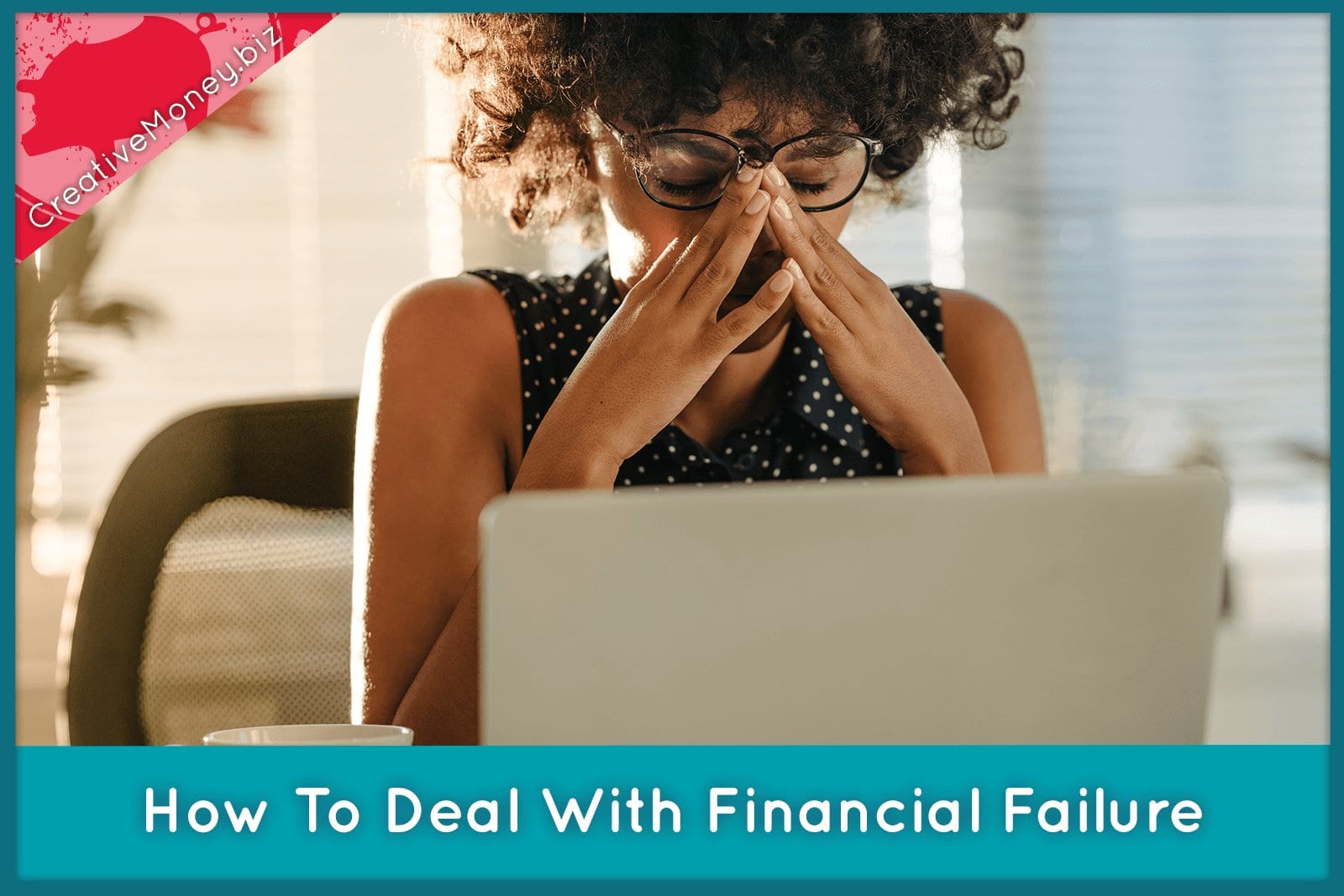 No, you don’t have to say it out loud if you’re embarrassed.  But I want you to think about it: What do you consider your most recent failure?

And how does it make you feel?

Many people think of failure as the undesirable result of something they attempted, when really it is just the beginning of a journey with many bumps. Click To Tweet

Before Mint came out, I failed at using Quicken about 15 times.  I would start and stop about 3 times per year. I am not even going to mention the other options I tried, because those didn’t even last as long as Quicken.

When you’re a business owner, you pretty much fail all of the time.  That blog post failed to garner the attention I hoped it would. I failed to sign a client I was excited about.  That class failed to attain my registration goal. I failed to be interesting enough for the media to quote me. I failed to get my book proposal done January through September.  I failed to keep up my bookkeeping when my contractor abandoned me. The list goes on.

Social media gives the impression that all of us are more successful, richer, thinner and kinder than we actually are.  With stuff like this, it’s hard to TRY things publicly, let alone fail at them.

That’s why you have to keep failure in perspective. At some point in their lives, everyone thinks they are failures. But instead of letting that failure stop them, instead of giving up, achievers keep trying. They hold onto self-belief and refuse to see themselves as failures.

How to fail successfully

There’s an art and a mindset, then, to taking any given failure and turning it into success — because even just taking a lesson from it and moving on is success.

One of my favorite writers on teams and leadership, John Maxwell, gave us seven abilities that people can use to reframe their failure, persevere and keep moving forward:

Reject Rejection.  People who persevere do not base their self-worth on their performance. They have a healthy self-image that’s not dictated by external events. When they fall short, rather than labeling themselves a failure, they learn from mistakes in their judgment or behavior.  I’m actually very split-personality about this; I tell myself, “I’m a dork, no one likes me…” and then my other half says, “Suck it up crybaby, get back in there!” At least I have a process.

Take the Blame.  When people fail, they’re often tempted to blame others or external factors for their lack of success. By pointing fingers, they sink into a victim mentality and relinquish the course their life takes to “fate.” When playing the blame game, people can’t learn from their failures.  I just watched a show where the protagonist said, “I am having SUCH a bad day, I keep running into assholes.” And her friend said, “Everybody, huh? Maybe YOU’RE the asshole.” And the minute she realized she was the common denominator, she got her power back.

See Failure as Temporary.  People who personalize failure see a hole they’re permanently stuck in, whereas achievers see any predicament as temporary. One mindset gets stuck, the other looks forward. By putting mistakes into perspective, achievers are able to see failure as a momentary event.  And the more you allow yourself to potentially fail, the better you get at moving on.

Set Realistic Expectations.  Unrealistic goals doom you to failure! For instance, if a person hasn’t exercised for five years, then making it to a gym twice a week may be a better goal than going every day. No one is perfect; everyone fails, so people must emotionally (and strategically) prepared to deal with setbacks.  Everybody always says they want to complete something in a year (I want to reach 6 figures in a year, I want to lose X pounds in a year, etc.), but is that really realistic? Wouldn’t you be happy a year from now if you even accomplished HALF of what you idealistically hope for?

Focus on Strengths.  Don’t spend more time focusing on flaws than building on your strengths. People who recognize and act on their strengths have a far lower rate of failure than those who try to fix their weaknesses. You’re built to give your talents to the world; be diligent about using them.

Vary Approaches. In the Psychology of Achievement, Brian Tracy writes about four millionaires who made their fortunes by age 35. On average, these achievers were involved in 17 businesses before finding the one that took them to the top. They kept trying and changing until they found something that worked.

Bounce Back.  Rehashing mistakes for too long sabotages concentration and eats away at self-confidence. When dealing with failure, achievers have short memories. They quickly forget the negative emotions of setbacks and press forward. While they do stop to learn from failures, achievers realize that the past cannot be changed. and let me emphasize:  I am never beyond feeling angry, frustrated, dorky or powerless; I just move past it faster.

Think about these tactics; which ones have you been forgetting to apply to your financial mindset when you have a failure?

It’s impossible for people to believe they are a failure and move forward at the same time. My hope is that anyone who has suffered setbacks recently — whatever they are — will be able to separate life’s unfortunate events from their self-worth and future action. Failure is a constant. Your response to failure holds the key to what happens next.

The key to bouncing back from money failures is to look at your money regularly – you can get started on that by booking a consult with us or checking out our library of financial planning and mindset resources.  You can get that here.

Does your spending reflect your values?
March 30, 2022

Do the holidays (and your finances) right
December 1, 2021

Does debt and money give you anxiety?
November 3, 2021

Is Spending a Coping Mechanism For You?
October 27, 2021
Go to Top
If you'd like more information like this,
be sure to check out my free Money Chakra ebook.
Don't forget to also check out my FREE
Team Delegation Planning Worksheet.