Money and the Blame Game 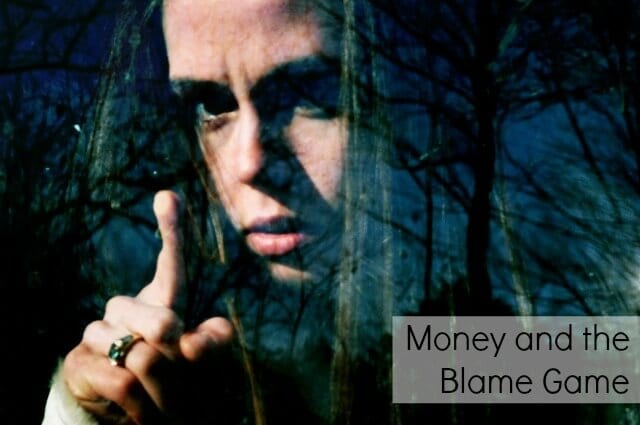 Lots of people play the blame game with money—you blame the person who “owed” you because you worked so hard, or tolerated something else that you thought would bring a greater payoff—but whenever you play the blame game, you miss the opportunity to gain more power, control and peace over your money. And when you don’t recognize the dynamic you’re engaging in, you’re doomed to repeat it.

Blame is about Survival

Blaming someone else (or blaming yourself) about any frustrations over money has to do with the basic thought that your survival is being compromised. The perception is that this other person has the power to make or break your financial life, depending on what they do. It’s very difficult to like, much less love, someone on whom you believe that your survival depends. So when you are engaged in the blame game, you may forget that you are every bit as responsible for the relationship dynamic as the other person.

If you often feel like someone has more control over your money than you do, then you’re probably engaging in one or more of the archetypes of survival. These don’t deal exclusively with money, but since money is a survival issue for many of us, we find ourselves acting in ways that make us feel LESS empowered about money—usually at the moment when we most need to feel secure. Here are the 5 archetypes that are most common with money and survival issues.

Victim. The Victim feels helpless to get his needs met and believes s/he has to struggle for everything. The Victim always sees the reason they aren’t getting what they need is because someone else or something else always prevents it. Patterns include focusing on the “lack” or absence of what they want and avoiding doing things that are new, different or perceived as risky. To move out of a victim mentality, you must start owning your role and acknowledging how you have been an equal partner in creating the situation, with the power to affect alternate outcomes.

Martyr. The Martyr gives too much out of a desire to receive love, attention and approval from others. They might appear to be selfless, but what is given comes from a self-righteous place—if they don’t get back what they hoped to receive by giving, they become resentful. Martyrs often believe deep down that they are not worthy of having what they want. The solution for Martyrs is to start giving to themselves first. This isn’t selfish, any more than it’s selfish to affix your oxygen mask before helping others in the airplane scenario. Once Martyrs start putting themselves first, they start to believe in their own deserving and worthiness to receive.

Servant-Child. The Servant-Child abdicates power, responsibility and control to others. They don’t want the burden of deciding what to do for themselves because it paralyzes them. Since the servant gives up control and power when trying get what they want, they often become inflexible, manipulative or “attached” to the outcome. Servant-Children should trust themselves to take on more responsibility to prove that they can handle it. Once they build confidence that they can deal with situations on their own, they feel less and less like they have to manipulate everything in their environment, and own their power outright.

Prostitute. The Prostitute is willing to barter self and integrity in return for external trappings, material possessions and security. They believe that they have to pretend to be someone they are not or that they will be judged. They are overly sensitive to what other people think, and often search for “proof” of the love and approval in their lives. To heal, Prostitutes must prioritize their inner world over their outer world until they get a better sense of who they are, what they care about and how they want to “be” in the world. Prostitutes’ primary journey is one of self love and self forgiveness, so that they can eventually understand that they are “good enough” to get everything they need on their own, without compromise.

Saboteur. The Saboteur repeats self- defeating patterns in order to stay safe within their comfort zones. Saboteurs’ low self-esteem causes them to make choices that block empowerment and success—they think that they can’t have, or don’t deserve to have everything they want. They may even be sabotaging themselves so that they don’t appear as successful as a mate or someone else close to them. Saboteurs may engage in other archetypal behaviors to assist them in their self sabotage. Saboteurs must keep in mind the famous Marianne Williamson quote (abridged):

Blaming someone else provides a focal point for your frustration, but it doesn’t solve the core issue of giving you more control over your money. You may not even be aware that you have been playing the blame game, but you may be wondering why you are not as successful with your money as you want to be.

Even if you don’t think these archetypes apply to you, think about how you interact with the people in your lives, both in the past and present. Sometimes it helps to pretend you’re complaining to them, or yelling at them . . . in that situation, what would you say that you’re not saying to them directly? With regard to this person or entity (like an employer), ask yourself these 5 questions:

After you gain clarity around what archetypes you’re engaging in (and honestly, it could be ALL of them playing out in different areas of your life), it’s difficult to continue the dynamic. Not because there is any need to end the relationship; that person will respond to you differently when you start to think differently about yourself. Even without taking specific action, your new-found self awareness will help you change to healthier relationship interactions. And the result from that will be a healthier, more powerful, conscious and peaceful relationship with your money.

P.S. This is exactly the kind of stuff I address in my Money Chakra program…how to eliminate your money blocks and get conscious about the energy you’re bringing to your money.  You can check that out here.

How to Stop Accidentally Wasting Money
June 24, 2020
Go to Top
If you'd like more information like this,
be sure to check out my free Money Chakra ebook.
Don't forget to also check out my FREE
Team Delegation Planning Worksheet.