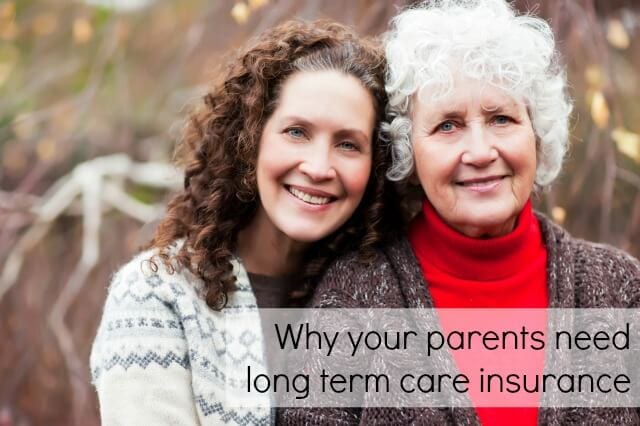 My client base is mostly Gen X and Gen Y, with a few super cool Baby Boomers thrown in. So I don’t talk about long term care insurance a lot…but I think it’s very important. So this is my public service announcement to get it on your radar!

My story actually starts with my great aunt Evelyn. I never really knew my grandparents, but Evelyn always came for Christmas. She didn’t have any children, so my mom was in charge if anything ever happened—not that we ever thought about that. She was way down in San Diego, and we were in Oregon.

When she was 82 years old, she started having small strokes—TIAs are the proper term. Since she lived alone, it took awhile for anyone to notice. Eventually, Evelyn’s friends called my mom, and Evelyn agreed that it was time that she lived with someone. She was having a hard time getting around and cooking, plus her house was a mess. But it just seemed like she needed someone to keep an eye on things. She wanted to come live with my mom and dad, and they agreed.

She lived with my mom and dad for 5 years before they moved her to assisted living. Her deteriorating mental state made her resentful of my parents—instead of remembering she wanted to live with them, she saw them as the people preventing her from being with her friends. My mom’s physical and mental health went down the tubes, which is typical, due to the stress placed on the primary caregiver. Evelyn was happy to go to the assisted living facility down the road.

Evelyn isn’t typical, because she stayed in an assisted living facility for 10 years (most people’s stays are a lot shorter). Assisted living means that she could get around with her walker, eat meals herself but they kept an eye on her when she took a shower and got dressed. It evolved to greater levels of care and monitoring, which essential changes it from “assisted” care to nursing home care. She died at age 98.

Evelyn never had long term care insurance. She had a healthy pension from the Navy and assets, so when she entered assisted living, she could pay for it herself. But after being in care for 10 years, she eventually spent down her assets. Mom went to the local Medicaid office when Evelyn had about $150,000 left, and they arranged for Evelyn to go on Medicaid, which means that Medicaid took over her Navy pension, but covered all of her facility costs. Her facility moved her to a smaller room, but they weren’t allowed to kick her out just for switching to Medicaid (it can be hard sometimes to find a good facility if you start out on Medicaid). Medicaid instructed my mom to use the remaining assets on personal needs, such as clothes and shampoo and other stuff.

My mom and dad would have tried to pay the cost of the facility out of their own pocket, had I not told them about Medicaid. Evelyn was also lucky (?) that she didn’t have a spouse, because that meant all of the assets could go to her support, versus trying to figure out what to do to maintain the second spouse’s standard of living while trying to cover the costs of assisted living.

My mom and dad never wanted my sister or me to go through what they had to go through with Evelyn. They purchased long term care insurance policies in their 60’s.

Fortunately or unfortunately, my mom never got to use hers. In 2012, she died of a brain tumor that was growing so fast, we only had a few weeks with her after discovery. Just about the time we were thinking that she’d need to use her long term care insurance policy, she was gone (which I actually prefer, to be honest).

My dad is going to be 80 this year, and he is still going to the gym, gardening, cooking and cleaning out the gutters (yikes). He lives alone and recently informed me that he plans to live another 15 years and remain in his home. Okay. He doesn’t read my blog, so I feel okay in mentioning that I think that statement in and of itself shows a teensy bit of senility. Statistically speaking, most men go before age 85. I’m sort of dreading it, because I know I am in charge when it happens, but the fact that he has long term care insurance gives me a lot of peace of mind, knowing that even though that life transition will be stressful, it won’t be financially stressful.

I am by no means a long term care expert; in fact, if you’re at all concerned about one parent spending down assets while the second spouse is trying to make ends meet outside of an assisted living facility, you might want to meet with an elder care attorney.

I think that everyone should have their own has long term care insurance policy if they know they won’t go on Medicaid (and who knows, it might be worth it to have a policy even if you eventually do). Here’s some info on understanding when Medicaid will pay for nursing home or assisted living. It’s usually best to acquire your long term care insurance policy before age 60; they find that the total cost over time actually goes down, the sooner you get it. When I used to sell this stuff back at the start of my career, we used to start having the conversation when people turned 55.

Do you know what your parents’ plans are? Here’s a great resource to get the long term care insurance conversation started.

And here are some topics to cover once you decide to have the long term care insurance conversation.

Here are some long term care statistics you can refer to loved ones, although I always notice personal stories seem more impactful.

Have you read/learned/encountered any good resources on LTC insurance? Leave links in the comments!

P.S. And for something entirely different, here’s my very-popular post, How To Have Less Struggle With Money Problems (isn’t that always the way? I’m never sure why some posts are popular and others aren’t … but some of this might apply to chatting with parents about long term care plans, so probably worth a look).

6 Ways @TheBloggess Makes Good Financial Sense
August 13, 2013
Go to Top
If you'd like more information like this,
be sure to check out my free Money Chakra ebook.
Don't forget to also check out my FREE
Team Delegation Planning Worksheet.