Six Steps To The Pay Increase You’re Worth 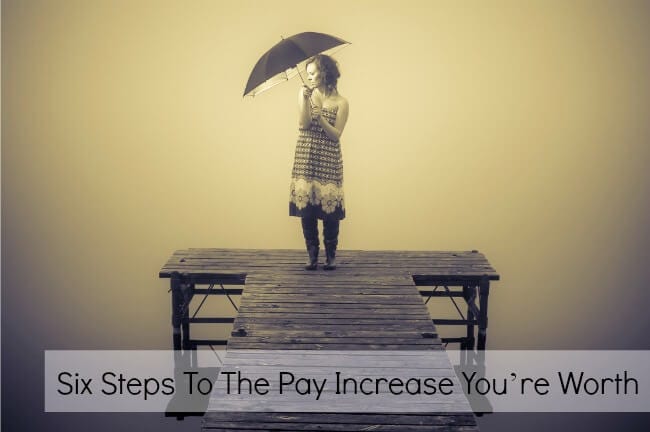 There was a time in my life when I believed that hard work and “proving myself” were the keys to getting a pay increase and financial success.  I believed that if I showed my employers what a valuable employee I was, they would reward me appropriately.

Fed up with my lack of career progress, I turned to graduate school.  While I attended grad school at night, I worked during the day as an assistant for a civil engineering firm.  In a short 12 months, I had mastered not only my job, but had also taken on another position from someone I covered during maternity leave but who decided not to return.  I was proud of my efficiency and I knew my employers were very happy with me.

When my performance review was coming up, I outlined all of the tasks I had assumed.  I showed how I was saving them close to $30,000 annually by not hiring another person.  I provided an executive summary to help them prepare for our meeting.

I anticipated a significant pay increase, because even if they gave me another $8/hour, I was still cheaper than hiring the second person I had replaced.  I didn’t need the money because my expenses were low, but I expected to be rewarded for my contribution, regardless.  You see, I had already received so much approval and positive feedback for my work that I just assumed we were all on the same page.

At my review, the two bosses lavished praise on me and confirmed they were happy with my performance.  They agreed completely with my executive summary.  Then they offered me a ten cent hourly pay increase.

For a moment, I saw red.  I didn’t do anything and my supervisor started speaking angrily on my behalf.  But in that moment, I realized if they didn’t see (and value) everything I had done for them already, they never would.  In an instant I had total clarity.

I calmly gave my two weeks’ notice.  I don’t know why this was different than other jobs; maybe because it wasn’t my career so I was okay losing it, or maybe because I was so confident in the value I provided.

They were stunned.  They tried to dance around and appease me, but I laid it out: “Either you see my value and want more, or you don’t.  I deserve a $10/hour pay increase, not a 10-cent/hour pay increase.”  I said it very matter-of-factly.  And then I left the room.

I knew I could get another job to cover my bills, so I wasn’t worried about that.  But as I sat there at my desk, they called me back.  They decided to give me the $8/hour pay increase and apologized for their short-sightedness.

I took the raise and stayed—my primary focus was grad school anyway—but it changed my outlook completely.  I realized that it wasn’t THEIR perception of my value that garnered my raise, it was MY perception.  And it was the strength of my confidence in myself that brought me through what could have been a self-esteem-bashing, demoralizing situation.

The Pay Increase Is Up To You

You can’t wait around for someone else to define your value.  YOU have to value your contribution more than anyone else.

This isn’t to say I am always confident and I never question my value—but the more confident I have become, the less time I spend working with and talking to people who DON’T respect my contribution.  Here are some steps to help:

1. Rethink your value.  When I hired staff in the past, I would eliminate someone from the candidate pool if s/he asked for too little money.  Too little money made me question whether or not s/he was capable of handling the position.  So the whole staff search process was driven by what the candidate thought s/he should earn, not by me!

2. Give yourself credit.  People don’t toot their own horn enough.  Make a list of everything you have accomplished this year.  As a self employed person who doesn’t answer to anyone anymore, I am especially bad at this!  But if you’re employed by someone else, this is essential.

3. Take the emotion out of it.  Once I understood that my earnings were a reflection of MY beliefs and not my employers, I was able to stay calm and level-headed.  I realized the only time I ever got frustrated and cried was when I was disappointed in an employer’s unwillingness to validate and approve of me.

4. Accept there is an “X” factor.  You’re not going to be able to account for 100% of what you want to earn through research and comparison.  You might wonder what value people get from paying you as much money as you actually want.  Get comfortable in some ambiguity, because people who are trying to build confidence in earning what they are worth tend to discount the unique experience they bring, which is worth MUCH MORE than what you can see and compare.

5. No neutral energy.  People are either on your “team” or they aren’t.  Surround yourself who believe in you and support your worth.  True, I stayed with the engineers another year and a half, and our relationship was forever changed, but I was also aware.  After that experience, I no longer bought into their version of “a pat on the back is greater than or equal to actual money.”

6. On the other hand . . . no one is actively trying to block you.  This isn’t personal and if you don’t like how someone is treating you, check the energy you’re bringing to the party.  Do you remember how your mom used to just look at you, and you knew you had crossed a line?  Practice that look with people who mess with you.  KNOW that you deserve to be treated with respect . . . and that it pays a lot more than approval.

P.S.  If you think you might have a money block around this, I encourage you to read my free ebook Money Chakra, which helps people eliminate their blocks from an energy standpoint, for good.  You can download that here.