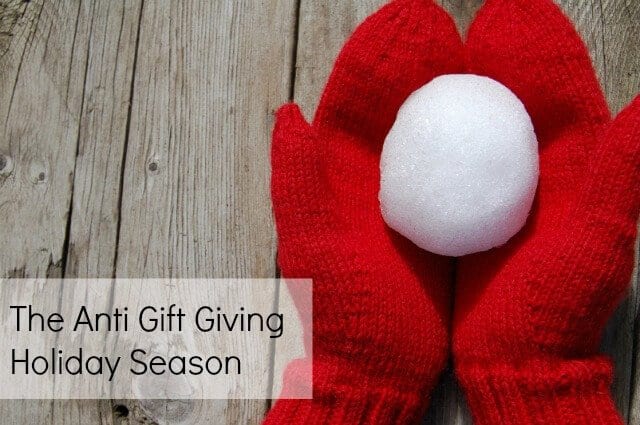 Switching focus from gift giving to others to giving to yourself, is the best way to feel some relaxation and peace during the holiday season.

You may think others might feel neglected, when in fact, they will feel more peace and happiness as well.

My Family History of Not Giving

For the past several years, my family and I have not engaged in the wrapped-and-bowed gift giving tradition. of the year-end holiday season. We started this because none of us could think of a gift we truly wanted; then we’d each be scrambling to think of something, anything, since not giving a box with a bow was unacceptable.

We all got tired of this dynamic, and since my sister and I no longer lived with my parents, it became harder and harder to tease out other each other the things we wanted as the holiday season drew near. One year, we said, forget it, let’s enjoy the other elements of the holiday season–this way, the pressure is off, and we can relax and enjoy the season without killing ourselves with gift giving.

At first, it was just a convenience, no big deal . . . we all enjoyed our new anti gift giving tradition every holiday season without thinking much about where we reallocated that money (or, at least I didn’t).

Until one year, I watched a friend’s toddler-daughter unwrap her gifts. There was so much STUFF that the little girl couldn’t even focus . . . there were dolls, and Disney princess outfits, and random toys and play structures. My friend was actually shocked and embarrassed at how much stuff people sent her daughter . . . she had thought that she and her husband would give her daughter her primary gift, with little trinkets from other people if they cared to give.

It was a deluge of plastic princess pink pandemonium. The little girl became so exhausted just unwrapping gifts that she actually gave up. No one could walk in the living room. Where was my friend going to store all of this STUFF?

And, being the financial geek that I am, I couldn’t help but think how much money spent during the holiday season that could have gone to a college fund?!? My friend later expressed the same sentiment, and as we watched her daughter, we realized that she would have been happy only receiving the top three gifts. My friend estimated that would have totaled about $200.

I’m not against traditional gift giving–not just during the holiday season, but throughout the year–especially if you know it’s something the recipient will use or enjoy. But wouldn’t it alleviate some stress to NOT give gifts to everyone you know? Especially if you’re making a guess as to what would be the best gift to give anyway?

My family feels a little smug that we have escaped the gift giving social conventions and never looked back (so we must be annoying to talk to –sorry about that!). I get asked, what do we do on Christmas instead of opening gifts? The short answer is, whatever we want, but we have been known to:

I know other families that take the money they would have used to buy stuff and use it instead to create an experience, like a great trip, or to go skiing or some other family adventure. Memories of experiences are always better than memories of stuff.

My best friend and I never exchange gifts, and that just proves to me she’s a true friend . . . if I had to stress about buying a gift for her, that would detract from the friendship. A couple of years ago, she surprised me by being in town on Christmas and called me to see if I wanted to catch up for an hour or two between familial obligations.

We ended up meeting at a Subway, because it was the only thing that was open, and I got to be one of the first people to hear that she and her husband were pregnant . . . if I were worried that I didn’t have a present for her, or too busy opening my OWN presents, I might not have gone! Instead, I have the hilarious memory of hanging out at a Subway with her (and asking her inappropriate questions about the pregnancy) while it was starting to snow outside . . . and that’s the ONLY thing I remember about that Christmas.

Now that I don’t “do” gift giving, that’s how I like my holidays . . . relaxed, fun with plenty of time to spend with the people I enjoy most, INSTEAD of spending all of my time buying things for them. You’ll be surprised at how little you miss gift giving!

Have financial problems? Do this…
November 12, 2013
Go to Top
If you'd like more information like this,
be sure to check out my free Money Chakra ebook.
Don't forget to also check out my FREE
Team Delegation Planning Worksheet.