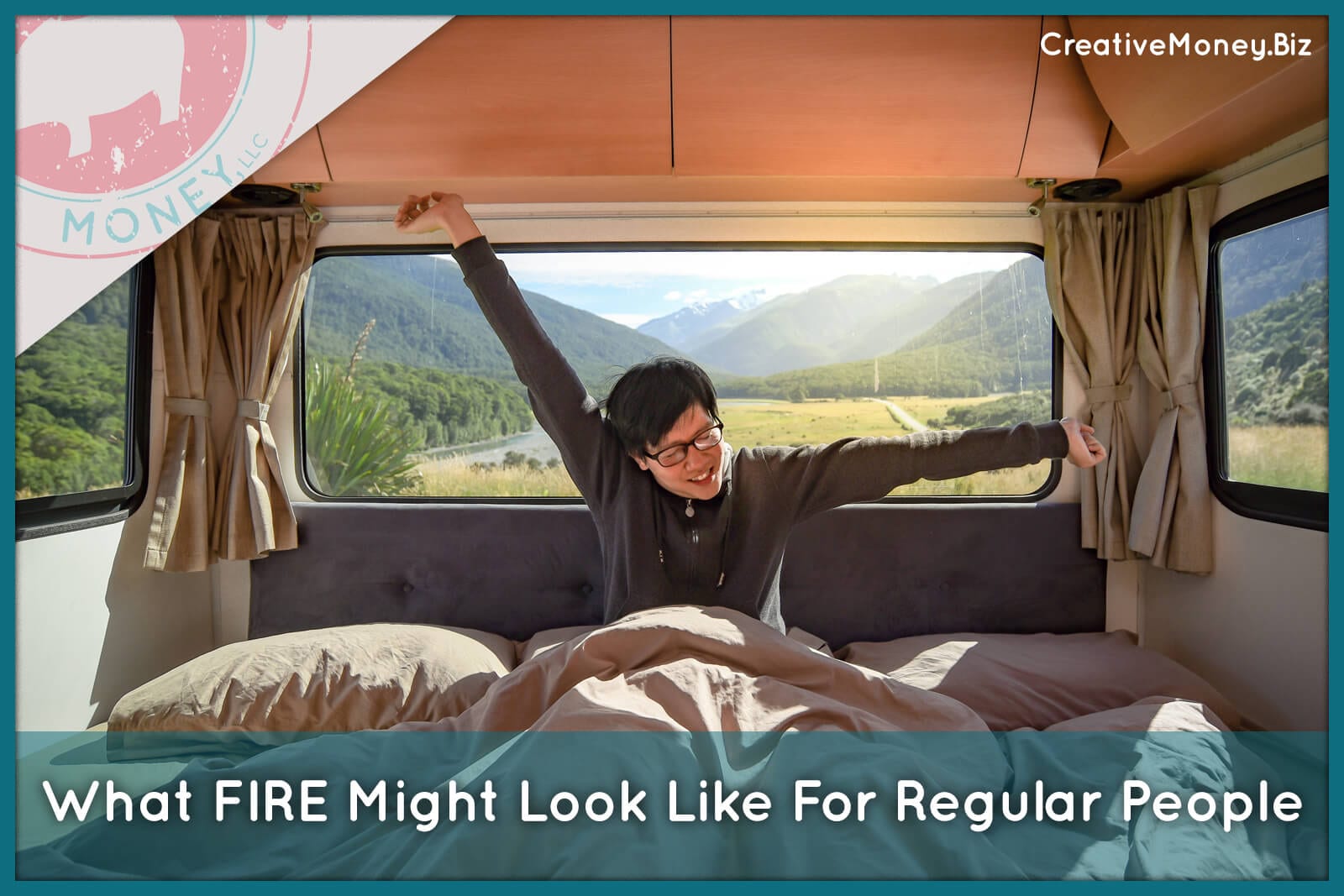 There is a movement called FIRE that stands for Financial Independence Retire Early. These people do a lot to retire early, and there are stories of super-human frugality. The point is, these people are working hard to save and to get to that point of leverage – leveraging savings, assets, everything to move to a better vision of the future.

So, this isn’t really FIRE, but it’s how financial planning helped some people get CREATIVE with their money vision. Because that’s how we roll here. This case is real, but personal details have been changed to protect the innocent.

Jane was tired. In her early forties, she just didn’t have the energy to face down another 20 years of doing her exact same job. Dick, her husband, loved his job. He’s in sales, so he gets to travel around and visit clients in the area so that suits his outgoing personality. The goal: how do we “retire” Jane from her job and generate the same amount of income in another way?

Our financial planning helps some people get CREATIVE with their money vision. Because that’s how we roll here. Click To Tweet

Dick and Jane did the first thing that most people do when they are trying to generate more income: they bought the townhome next door to them and started renting it out. This was a fantastic move; they were generating about $40,000 in rental income annually to cover mortgage and expenses of $22,000…which means they were making $18,000 free and clear. But this was just one piece of the puzzle. Jane’s take-home income was about $50,000 after taxes, 401k and other benefits. To cover her take home income (not to mention her gross income), they would need to figure out how to generate at least another $32,000 annually. Their next idea was to start renting out where they live – their existing townhome. But given the timing of the Seattle housing market, that mortgage was a lot higher, and their net income after rental expenses wouldn’t be as high.

Dick and Jane also had a vision of living in the San Juan Islands (and in case you didn’t know, the islands are an awesome vacation destination for people who like to hike, kayak, etc.). They wanted to buy land and start some kind of a business. There’s a lot of camping, glamping, yurting going on up there, so lots of possibilities. Here’s the most important thing that Dick and Jane told me…they were willing to save Jane’s income ($50,000 annually after taxes) and live on ONLY Dick’s income for the next 5 years if that got them closer to 1) replacing Jane’s income with other sources and 2) facilitating a move to the San Juan Islands.

The vision that both of us went to immediately was to put some tiny houses on the land so tourists could rent a tiny house away from the busy part of the island. The especially nice thing about their parameters was that Dick could keep his job…or, he is talented enough in his profession that he could easily find a new one that allowed him to travel from the San Juan Islands a few days per week.

Open A Can O’ Financial Planning

The first decision was how to best use the money they were projected to save over the next 5 years (5 x $50,000) = $250,000 Jane wanted to pay off the two mortgages as fast as possible…but she couldn’t pay those off inside the 5-year plan. Additionally, if they paid down the mortgages, since they wouldn’t be paid off in 5 years, they would have nothing to show for their 5-year plan (except lower mortgage balances). Not even cash flow would improve because paying down a mortgage doesn’t change your payment.

The second part of the plan would be that when they leave their primary home to go live in the San Juan Islands after 5 years, they turn their existing home into a corporate rental. Therefore, each home would have healthy net revenue at the end of 5 years. But the best plan of attack would be for Dick and Jane to use their savings for other things in order to leverage that money and opportunity further.

They love the tiny house movement, and so the vision was to purchase a piece of land and put tiny houses on it to rent out. To do this, they would need to:

Obviously, there are a million pieces not included here, but that gave us a big picture plan of attack. The next key piece?  Buy some land for those adorable tiny houses.

As soon as they have saved ~$35,000, they could move forward with buying some land.  Here is a typical finance scenario:

378 Little Mountain Rd, Friday Harbor, WA 98250 (no, this isn’t what they are actually buying, but I live vicariously through my clients and thought this fit the parameters we discussed)

Dick and Jane would need to pay the mortgage until the Tiny Houses were up to speed – about two years.  This can be covered from the net revenue of the existing rental so it doesn’t eat into the savings of Jane’s salary. Also, they will need to cover property taxes, which will start low, but increase as they add value to the land with utilities. The next few years will be about getting the site organized, planned and connected to utilities. As a side note, I also encouraged them to get a home equity line of credit on the rental, just to give them a little cash flow support in case they could start moving forward on things more quickly than they could save up Jane’s salary.

Another example of me living vicariously through my clients…I found a CUTE house example that was more expensive than they mentioned (they thought they could easily get a prefab tiny house for under $50,000, especially if they get a discount on buying more than one), but I figured it is better to go expensive and be pleasantly surprised when it’s cheaper. The cool thing about a tiny house is the financing…it’s more like buying a car than acquiring a mortgage. I realize it’s not a traditional tiny house, but whatever.

So, for 5 homes, that is $75,000 down total, shipping, installation and appliances included.

At 30% occupancy rates (which is SUPER conservative for the San Juan Islands with their crazy tourism) and with the initial start-up costs, years 3-4 of the 5-year plan would be slightly negative cash flow if you factor in the land mortgage payment and the home payments along with other overhead costs like marketing and advertising. Additionally, I built in 20% partial property management costs into the model so, worst case scenario, they could get started with renting out the tiny houses without Jane needing to physically be there to clean and maintain them.

Even with NOT paying anything off and financing everything, Dick and Jane would have the following net revenue before taxes at the 5-year mark:

If I back out something for taxes, then Dick and Jane are just slightly under what they need to totally replace Jane’s take home income. And yes, there are other considerations, like continued saving, health insurance, but I think that is pretty darn good for a 5-year plan! In 2022, they can decide if they want to relax a bit in terms of saving and start using some of the revenue to live on, or, if they continue to accumulate for the next property.  If you look at just the Tiny Home income, that can keep going up with occupancy. They did all of this with only $150,000 of projected savings, so this plan also gives them about $100,000 that we have not used for anything else and can be used for another property.

Yes, there will be a million little tweaks and adjustments as they go…but how exciting to start!

People are always asking me, “What do you mean by Creative Money, why did you name your company that?”

That! what Dick and Jane are doing?  THAT is Creative Money

Update:  One thing to remember is your vision is going to change.  Dick and Jane discovered that based on some rules about VBRO in the San Juan Islands, they might have to purchase a commercial piece of land instead of a residential one, which will affect costs and might shift their business model a bit. We are tweaking and adjusting as we go, which is exactly what happens.  Don’t get discouraged if things don’t go exactly as planned!

Money Moment: Making the switch from employee to entrepreneur
June 6, 2017

A specific case of fitting your money to your unique crazy vision
May 17, 2017
Go to Top
If you'd like more information like this,
be sure to check out my free Money Chakra ebook.
Don't forget to also check out my FREE
Team Delegation Planning Worksheet.