What’s your excuse to stay poor? 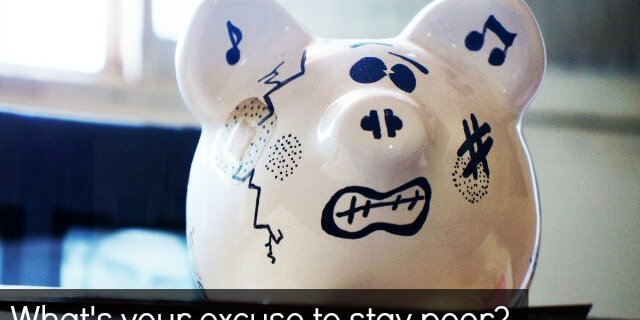 I know the title of this post seems really harsh, and for some people, maybe it needs to be.  The point is if you keep making poor excuses why you aren’t reaching your money goals, you will never reach them.

Excuses are goal killers; a book on an entirely different topic helped drive that home for me. A book called “…then just stay fat” has helped me get rid of poor excuses and prioritize my exercise and eating this year.

Shannon Sorrels, the author, discusses the “whys” people tell her when their scales refuse to budge:

And the list goes on.  I personally have used several of these.  But Sorrels’s book points out that there are no magic beans, that weight loss is solely a function of calories in, calories out.

The same is true about wealth building – I know that everyone wants to believe that there is a magic investment, but the majority of wealthy people simply work the practice of spending fewer dollars than they bring in.  Wealth is solely a function of money in, money out.  Poor is a function of more money going out than coming in.

Priorities are more powerful than excuses

This year, I decided that no matter what the ultimate results, I wanted better health.  That might not mean losing weight; it might just mean working toward “ready for anything” fitness…something I haven’t felt since well before breaking my ankle.

But guess what?  Because I prioritized eating healthy and working out, I have lost weight.  And I am a lot more physically fit than I was 12 months ago (thank you, Fitbit).

Last year, I felt powerless to change anything, and I felt like I was up against some of my health issues that were going to make it really hard to change…but at the same time, I also admitted to myself that I wasn’t making it a priority.  I wasn’t doing absolutely everything I could and then coming up against low thyroid or adrenal stuff; I was giving up before even trying.

When I got my Fitbit, I said: 10,000 steps a day, no excuses.  That commitment more than anything else I have been doing rearranged my life so that I was making health my #1 priority.

And guess what? That doesn’t mean that the other things on my priority list are neglected.  I think we’re afraid that if we make something a priority, other important things will suffer.  What happens instead is, other people take up slack or you find that you can do a lot with less effort and worry.

What is your priority?

For you, where does wealth building fall on the priority list?

Are you actively engaged in spending less than you’re bringing in?

And if not, what is your excuse?

If you made wealth building your #1 priority for the next 90 days (let alone the next year), what do you fear will be neglected?

Are you willing to suspend disbelief and move forward in uncertainty?

P.S.  You don’t have to do this alone.  My free lesson on the energy that affects your money blocks might be just the thing – you can download that here!