When Your Financial Habits Are Doomed To Fail 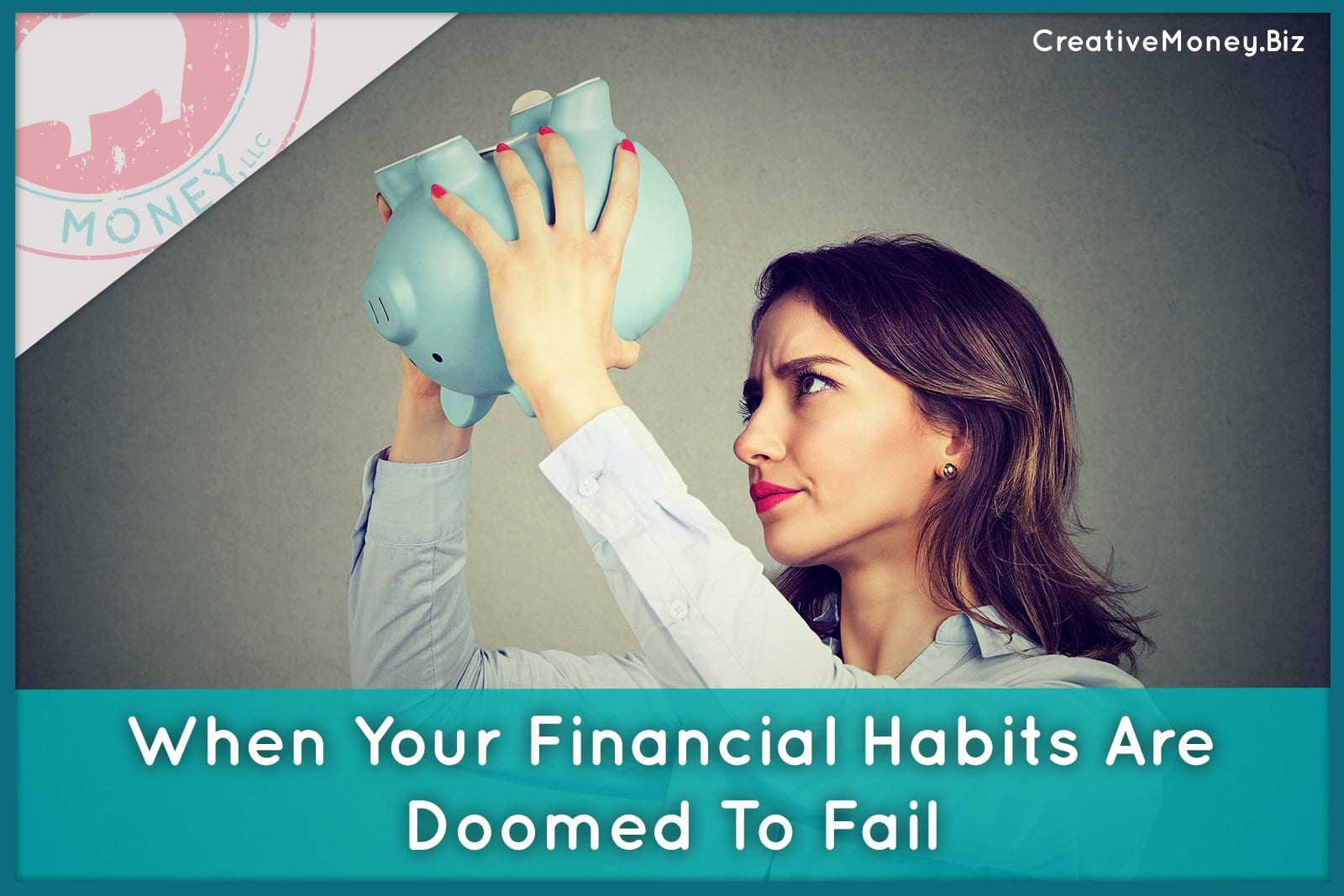 It’s actually Newton’s first law: An object at rest will remain at rest unless acted on by an outside force. While Mr. Newton was referring to physical objects and the laws of physics, I think this applies equally to the laws of psychology, which is why it’s so much easier to stay where we are than to change our habits. In fact, when faced with the uncomfortable challenge of changing a financial habit (and, let’s be honest, they all end up being kind of uncomfortable at first!), our brain can subconsciously look for loopholes that will allow us to stay where we were and not make any progress.

This “loophole” terminology comes from Gretchen Rubin’s book, Better Than Before, which is all about habits, and she points out that people avoid changing their behavior by finding different loopholes in the way they think about things (last week’s post was about this too).

When faced with the uncomfortable challenge of changing a financial habit, our brain can subconsciously look for loopholes that will allow us to stay where we were and not make any progress. Click To Tweet

Moral licensing loophole — “I’ve been so good, it’s okay for me to do this”

Have you ever given yourself permission to do something “bad” (eat potato chips, bust the budget) because you’ve been so “good”?  We reason that we’ve somehow earned it or deserve it, or that some “good” behavior has offset something “bad.” I’ve found that in the area of health, I had to “retrain my brain” to associate negative consequences with my perceived treat (that sugar will keep me up all night, or I was so sick the last time I had nachos, etc.).

With money, it might be reminding yourself of how you felt the last time you had a financial issue to head off that “deserving” mentality…and re-connecting that comfort trigger to something non-financial. Remember, too, that you can’t earn your way out of a bad habit.  There’s no free “pass GO” card in real life.  Even if you earn extra money this month, that doesn’t somehow negate a bad spending habit, eliminate that debt you have to pay off, or magically add more money to your savings (unless you actually use the money for the right things!).

Tomorrow loophole — “It’s okay to skip today, because I’m going to do this tomorrow

I know this is HUGE with diets: we have one “last meal” because we’re going to start dieting tomorrow. I also see this a lot when people start to track their spending, because when you begin, it’s sort of painful to see how you spent money—I equate it to stepping on the scale for the first time in a long time.

Some people even fool themselves into thinking that extreme indulgence now will give them more self-control when that magical future day arrives. This means that if you’re thinking of cutting back your spending, you might have a last hurrah and overspend. This is why I never tell people to budget — or go on a financial “diet” if you will — because it can backfire in a big way.  Instead, we need to look at the big picture to create a conscious spending plan that won’t be punitive, so you don’t feel the need to skip a day.

Planning to fail loophole – Apparently irrelevant decisions that have consequences

Do you ever make apparently irrelevant decisions that end up wrecking your good intentions? For example:

When it comes to keeping our good habits, instead of fleeing temptation, we often arrange to succumb. In what Dr. Alan Marlatt dubbed “apparently irrelevant decisions,” we make a chain of seemingly insignificant decisions that allow us covertly to engineer the very circumstances that we’ll find irresistible.

For people trying to get a better handle on money issues, this might look like going out to “just” window shop.  Or insisting you need to hop on the Internet to buy one thing, and then you end up buying 10 things. To eliminate this loophole, you usually have to stop the irrelevant behavior — but to do that, you have to pinpoint it. Think about the last time you broke your good habits and went back to a bad one: what decisions precipitated that poor choice or slip up?

Again, they will seem unconnected.  Maybe you accepted an invitation to lunch with girlfriends and ended up going shopping after.  Maybe someone paid back a loan in cash and you didn’t go to the bank right away — so you ended up spending it. Whatever the case, if you can figure out how you’re subconsciously setting yourself up to fail, you can take steps to prevent it.

One person I know actually tied a string around his fridge and freezer doors to remind himself not to look in there after dinner.  If you need to tie a string around your wallet, so be it! Once you notice yourself using these loopholes, you become more aware of them and can counteract them. That little thought disruption is all you need to start breaking those habits that aren’t helpful, and replacing them with new, better ones.

If you want more information on this, I highly recommend checking out Rubin’s book, or downloading my Chief Initiative free workbook that helps people get superclear about their #1 money priorities and what they actually want to change habits around.

What Financial Generosity Might REALLY Mean
January 22, 2020
Go to Top
If you'd like more information like this,
be sure to check out my free Money Chakra ebook.
Don't forget to also check out my FREE
Team Delegation Planning Worksheet.