When Listening To Your Gut Is The Wrong Thing To Do 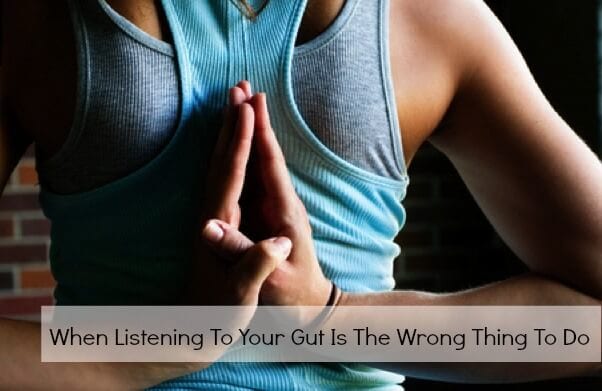 Initiating change in your financial life is difficult, because there are so many areas to consider! And when trying something new requires change in behaviors, schedules, processes or decisions, the common wisdom is to rely on your gut instincts to guide you. But recently, I discovered that when you try new things, your initial gut reaction is the LAST thing you want to use!

I learned in a recent yoga class that your body might be giving you the wrong message if you don’t listen long enough. Kathleen Buchanan, one of my yoga instructors at Vera Whole Health was guiding the class through some extended stretches and she made the following comment (not verbatim):

“When you first start to stretch a specific muscle, initially it might tense up and say, “No, we’re not stretching that much, STOP IT!” … but if you hold the stretch for awhile and breathe through it, the muscle thinks, “Hmm, this isn’t so bad, I guess we can relax a little more …” and then your muscle releases its initial resistance and allows you to stretch even more deeply.”

After she said that, I thought, wow, so my body’s initial instinct is protection which translates into “NO.” That explains so much!

When I started thinking about your gut instinct to tell yourself “No” before anything else, it reminded me of my mother. She had a very “id” personality, and so she would always blurt out the first thing that came to mind when I suggested something new. Without even pausing, she would say immediately, “No, I don’t like that!”

My mom and I had a great relationship, so I would just laugh and say, “Okay then!” Other family members would become irritated and start trying to talk her into it, which just made her dig her heels in more.

The reason I was so easy going about her reaction was that I never took it personally, or thought that she was trying to imply that my suggestion was a bad one. Then I noticed that as long as I accepted her initial refusal, she would ask follow up questions, like why did I suggest that, and why did I like it? Most of the time, she ended up agreeing to try whatever I suggested.

It occurred to me that my mom was simply acting like our muscles; initially protecting herself from potential pain-producing scenarios, but once she was able to sit with the new idea and “breathe” through it, she was able to commit to trying a new thing.

Without an understanding of what your gut (or your loved one’s gut) is going through, initiating change can come slowly or not at all. Consider these 4 steps to helping your gut through its resistance:

Assess. When I am feeling resistant toward doing something, I try to understand the quality of resistance. Am I scared of looking dumb? Do I dread the process? Am I overwhelmed by options? Am I afraid of messing up? Am I afraid someone will reject me? Am I concerned with being perfect? Am I afraid of missing out on something else? When you become conscious of the reason for your reluctance, sometimes you might think it’s silly and unreasonable—but that doesn’t matter and you don’t need to judge it. Your awareness alone will move you closer to working through it.

Appreciate. For years, I have imagined I have an internal “mini me,” sort of a bratty, 6-year old version of myself who is responsible for all of my bad behavior. Whenever I react negatively to something, I mentally regroup, pat her on the head and say, “Thank you soooo much, mini me, for pointing out all of those things I have to be scared of, annoyed by, frustrated with, etc. I know you’re just trying to help and it’s hard for a little girl to know how to deal with these issues, so even though your reaction isn’t exactly how I want to respond, thank you so much for being there to take care of me!” Oddly, this is the mechanism that has helped me the most in shifting from judging to forgiving myself!

Agree To Revisit. If you’re experiencing resistance, you don’t have to work through it all at once. Make an appointment with yourself to think about it again. I found that with my mom, if I gave her 72 hours, she would inevitably initiate another discussion. Actually, my last boyfriend was the same way: I would suggest something and he would criticize my idea, and we would have an argument. Then I learned a new technique with him, to drop the “new data bomb” and then back away. Within a few days, he would broach the subject and tell me he liked the idea I had :o)

Identify The Baby Steps. When implementing change, I find it’s easiest to focus on one thing at a time. For example, when clients are trying to trim their budgets, I suggest focusing on one spending category at a time, and take a month or so to see how this change affects them. Then they can adjust and adapt before moving onto the next one. When I reintroduced exercise into my schedule, I didn’t focus on anything that first month except showing up.

If you’re trying to create better energy around your money, you should download my free ebook, Money Chakra.  You can get that here!

How to Stop Accidentally Wasting Money
June 24, 2020
Go to Top
If you'd like more information like this,
be sure to check out my free Money Chakra ebook.
Don't forget to also check out my FREE
Team Delegation Planning Worksheet.