Why I Picked Up Hitch Hikers 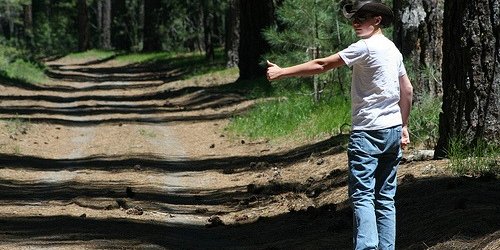 About three years ago, I attended a conference in Maui.  It was held in Hana, so I rented a car (SUV actually) and drove the world-famous Road to Hana with its 600 curves and more than 60 one-lane bridges.  Although Hana is only 52 miles away from the airport, we’re still talking about a 2 1/2-to three-hour journey one-way, because it’s SO curvy you can only travel 10 to 20 miles per hour. Plus . . . gorgeous!  So naturally, you end up pulling over to look at the many roadside distractions–waterfalls, fruit and flower stands, scenic overlooks, quaint bridges.  In my case, fresh, out of the oven banana bread . . . When you get to Hana, it’s SO small that they only have one ATM in town, at the general store.  The conference was being held in the home of an international expert who was rich enough to own a home there.

For five days we learned and practiced this “process” that we had signed on for—I don’t need to get into what it was, but it was billed as the next frontier in the finance industry (blah blah blah).  Only for me, it was so obviously just a sales process that I felt very disillusioned.  But I couldn’t talk about it to any of my fellow conferencers because they all made it VERY clear they thought this process was the greatest thing ever and our expert was a genius.  Sure, he was an accomplished professional and a good person, but I never developed the cult-like devotion that my peers did.

At the end of five days I was disillusioned, disappointed, isolated and out $5,000.  I KNEW that I was the one making myself feel this way because I couldn’t just relax and experience the conference and people and see it for what it was:  NOT the end-all for financial planning, but another learning experience.

It was the end of the conference.  I had just loaded my SUV and was starting out of town back onto the curvy road.  That’s when I saw the hitch hiker.  So I stopped and picked him up.

I have no idea why, or what came over me, I just did. Maybe it had something to do with connecting with another individual, or a desperate attempt to break out of my “mood” . . . I am still not sure.  The hitch hiker looked like a local guy in his early twenties.  He was really skinny, so I decided that I could take him if need be.

He thanked me for picking him up, gave me a five for gas and asked if he could turn on the radio.  Those are the last real words we said to each other.  After that, he rolled down his window all of the way and sat with his head hanging out the window like a dog.  He was talking to himself, mumbling really, and I couldn’t tell if he was asking God if he should kill me or WHAT(?), so it was then I decided that I would pick up a second hitch hiker, just to even the odds a bit in case this guy got homicidal.

Pretty soon we came upon a guy who looked like Reverend Jim from the sitcom Taxi, so I stopped.  This guy was completely baked.  I had concerns about his ability to defend himself, but it was okay, because in my homicide scenario I decided that he would get killed before me.  Meanwhile, in the real world, he distracted the first hitch hiker by challenging his dominion over radio control.

This was about the time I decided that picking these guys up had been a really, REALLY bad idea.  I started to channel my inner-NASCAR driver and zoomed around those curves!  The hitch hikers didn’t notice because they were still arguing over the radio.

Just as I was thinking to myself, “THIS is why I don’t pick up hitchhikers, I will NEVER do this again,” and I saw this guy—an extremely fair-skinned redhead with rasta braids–and a little boy, probably 6-8 years old. Well, I can’t pass a little boy hitch-hiking, so guess what I did again?

I picked them up.  Turned out that these two were by far the most normal.  Redhead Rasta Man was from Beaverton, OR.  They were so normal, in fact, that I am sure they thought I was one of the crazies when I showed up with my other passengers. Thankfully, Rasta Man and Boy Wonder somehow restored the equilibrium to our little group.  Before long, all arguing had stopped and I KNEW that we were in a good place when everyone started singing to the radio, Tina Turner’s “What’s Love Got To Do With It.” The rest of the trip occurred without incident.

I dropped everyone in Paia and proceed onto to the Kahului Airport.  The whole experience felt surreal, and I still reflect on that experience and wonder what I was supposed to learn—other than not to pick up hitch hikers (if you think of something, let me know!).  What it DID do was get me out of my head about the could’ve should’ve would’ve of my week, and bring me back to myself.  However, if you ever need to break out of a negative thought cycle, I do not recommend picking up hitch hikers!

6 Ways @TheBloggess Makes Good Financial Sense
August 13, 2013
Go to Top
If you'd like more information like this,
be sure to check out my free Money Chakra ebook.
Don't forget to also check out my FREE
Team Delegation Planning Worksheet.