Is Retail Therapy Actually a Thing? How One Woman Coped 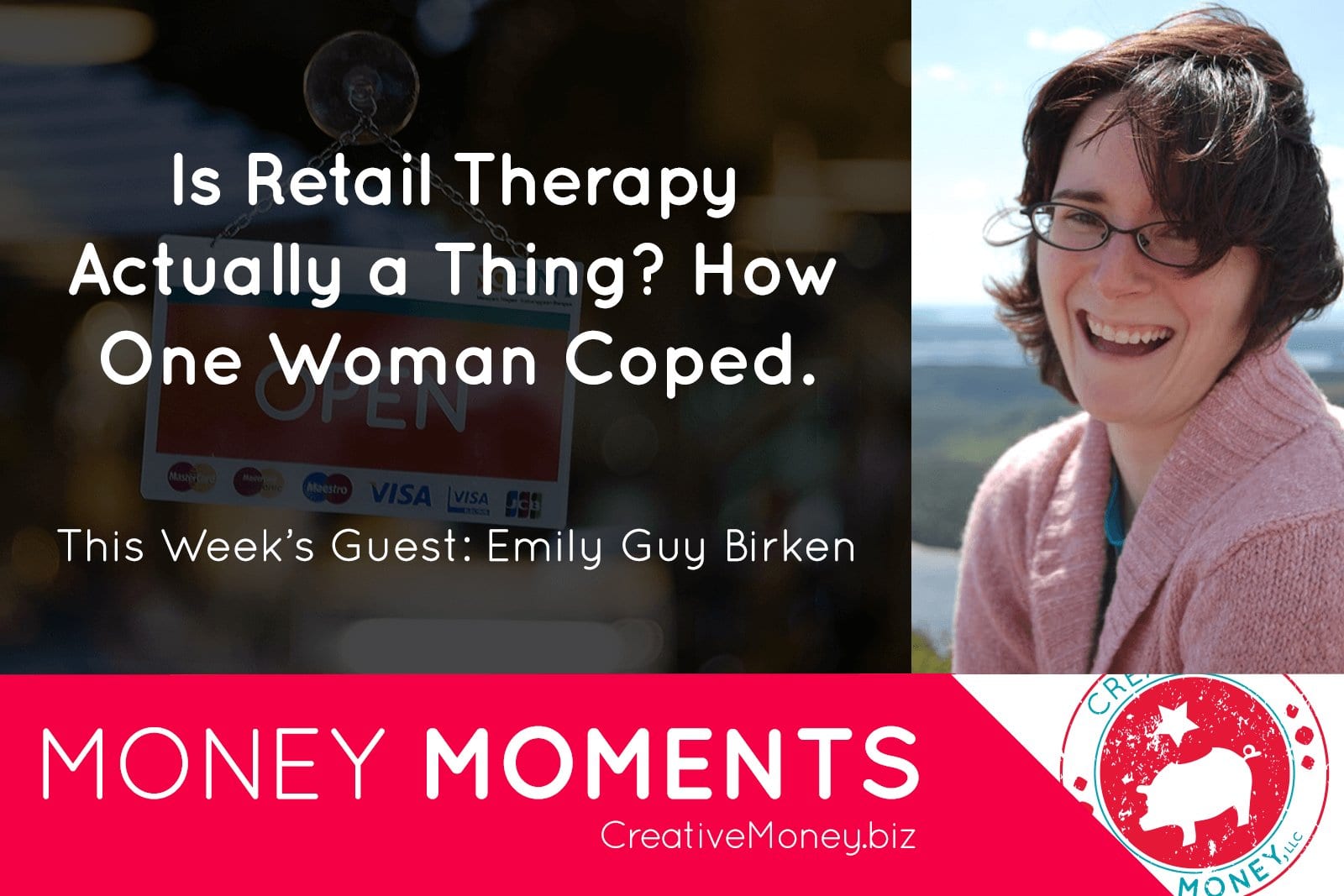 Have you ever engaged in a little “retail therapy” when you were particularly stressed?  If so, you’re not alone. In fact, it’s a well known economic indicator that women tend to buy more (drugstore brand) lipstick and nail polish when the economy is bad or in decline. Nobody’s really sure why, but it could be that we just need a cheap pick-me-up when times are stressful.

But for some people, the purchases can go way beyond a few bucks for lipstick. A friend of mine went to Target for pantyhose one day and came home with an iPad mini; it was two weeks after her father died, and she was clearly a little stressed.

Today’s Money Moment guest, Emily Guy Birken, author of the forthcoming End Financial Stress Now, found she was guilty of a little retail therapy before a stressful move. Luckily, she had a plan to get back on track.

Tell us a little bit about yourself:

I am 37-year-old freelance writer and mother of two young boys in Milwaukee, WI. I grew up in Baltimore, MD, and have spent my entire adult life moving steadily westward. I met my husband in Columbus, Ohio in 2003, we moved to Lafayette, Indiana just before our six-year-old was born in 2010, and we just moved to Milwaukee in the summer of 2016. I write about money and retirement for a living, with a focus on the psychology of money.

What was your money moment?

While we were in the midst of our move from Lafayette, Indiana to Milwaukee, my normal frugality went straight out the window. In one week, I bought a FitBit on impulse, a handful of new cosmetics from Target (and I generally don’t wear makeup), a bunch of office supplies, (which are my usual go-to splurge items), and a new blazer. None of these were needed purchases, and though I had wanted a FitBit for a while, there was no need for me to buy it at that particular time.

My shopping was a very clear coping mechanism. My husband had moved to Milwaukee ahead of us to start his job, and I was solo parenting and trying to get our house in Indiana ready for sale. My stress level was through the roof, and I found that shopping helped me to feel a little better, even though I usually feel good about my frugal purchasing and budgeting strategies. Even as I made these purchases, I’d tell myself that I knew better than to spend my way out of a funk, but shaming myself definitely did not curb the urge the splurge. (Sorry, couldn’t resist).

What tipped you to realize you were engaging in “retail therapy,” and how did you feel when you realized it?

It was probably the makeup purchase that made me realize I was trying to buy my way into feeling better. I’m really not much for makeup, so the fact that I was browsing among (and buying) eyeliners and eye shadows with my two boys (then 5 and 2) in tow was a bit of wake up call. I actually was mostly okay with the realization. I was thinking, well, at least I can make these purchases without giving up grocery money or anything like that.

Were you able to ENJOY the items you purchased, as a kind of self-care after you got them? Or was it just guilt all the time?

I was able to enjoy several of my purchases. I’ve been very glad for my FitBit ever since I bought it, for instance. I had been wanting one for several months but had decided I not to buy one. The impulse purchase has actually helped my fitness goals and spurred me to get outside and walk when I was really stress.

For the most part, every purchase I made was something that I truly wanted and/or needed. The makeup, for example, was the first makeup I had bought in several years. I don’t wear cosmetics often, but I had been thinking that I needed to replace some of my old stuff because I know it’s not healthy for you to keep using the same eye makeup for a long time. My guilt about my purchases was more about how many I was making all at once rather than the fact that I was buying.

How would you help someone recognize this coping strategy in themselves?

Any space you can put between thought and action is helpful. So if you find yourself browsing for something online, commit to leaving it in your online shopping cart for a day, or even an hour, before you make the purchase. Similarly, if you’re tempted in the store by something that is not a need, put it back while you shop for the items you came for. You can always return to the tempting items later. The time between picking something out and returning to it can help you recognize when your purchases are emotionally motivated, rather than rational.

What was your money mindset before this happened?

I’m generally a very frugal person. For instance, I am a runner and I know how important it is to make sure I invest in new running shoes when my old ones rack up the miles. I have known for about six weeks that I would need a new pair of shoes soon, but I’ve put off buying a new pair because my family had exhausted our clothing budget in November when we bought new winter gear for everyone. (Wisconsin is much colder and snowier than Indiana was). I’ve waited to make this necessary shoe purchase, even though we could easily cover the cost from another part of the budget, because I wanted to allow our clothing budget to build back up again before I purchased the new shoes.

What’s the biggest lesson, takeaway, or aha moment you got from this experience?

This helped me to take a step back and remember that my frugal habits and budgeting strategies are there so that we do have a financial cushion in case we need it. I’ll never claim that retail therapy is a need, but sometimes you do need indulgences to help you get through extreme stress, such as a major move, a divorce, a death in the family, or the like. (The only other time my frugality deserted me like this was after my father passed away in 2013).

We are fortunate that we were in a financial position to absorb my stress-related buying instead of having it add to our moving stress. We are in that position because my husband and I both make pretty good money, and we are very careful with it.

I also learned to be gentler with myself about indulging my shopping bug during this time. Beating myself up about making an unnecessary purchase did not stop me from making it, and it robbed me of the momentary stress-relief the purchase could have otherwise given me.

What would you most like people to know about money?

Being careful with your money most of the time can make sure you are prepared for the times when you are not completely careful with it. In nutrition, they’ll talk about eating clean and healthy 80% of the time, and letting yourself indulge 20% of the time. Living frugally can be similar. If you’re generally frugal, you can afford to indulge sometimes.

Have you had a “Money Moment” that taught you something about money, yourself, or your money mindset?  I’d love to help you build on that money moment!  I always say that you can’t just “work on your finances” once and be done…it’s an ongoing process.  So come over to my website and get access to an entire library of free resources!

How To Make The Holiday More Meaningful
November 18, 2020
Go to Top
If you'd like more information like this,
be sure to check out my free Money Chakra ebook.
Don't forget to also check out my FREE
Team Delegation Planning Worksheet.