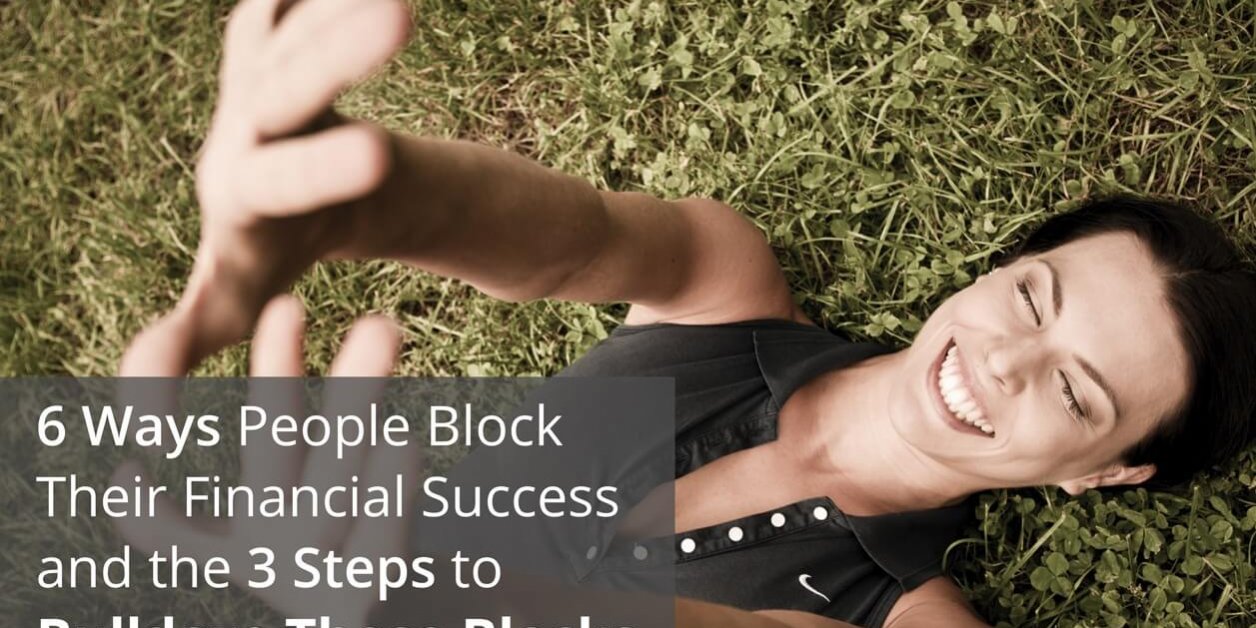 The mind is a powerful thing. And, its white knuckle grip on the health or malaise of your financial situation is incredibly fascinating to witness.

I recently chatted with a client who said, “I would give up all of the money I am making this year if I could make things right with my daughter.” She noticed that when her business thrived, things with her family would start to fall apart, and vice versa.

Could our thoughts really manifest our financial reality? Yes! Believe me, I see it every, single day.

But you don’t have to be an idle spectator in your financial life if your mind drives it to a destination where you don’t want to be. Saddled with debt. Barely making it to the next paycheck. Running ragged to make extra money, only to feel like no progress is being made.

You can release (heck, let’s bulldoze) those money blocks that hold you back to unveil the financial life you always wanted.

Sound impossible? Not when you boil it down to my three steps to release money blocks. But first, let’s take a look at the ways people tend to create their own obstacles when it comes to money.

Release your #moneyblocks to unveil the #financialfreedom you always wanted.

Universal Negotiation. That’s what my client was doing—taking two completely separate issues in her life and connecting them. This would be like me saying, “I will give up all of the Cheese Nips in the world if I could save the tigers.”

Settling. When I talk to my clients, something I hear a lot is, “I want to make $100,000 in the next 12 months.” When we discuss how they will get there, people start to object: “I can’t possibly charge that much/get that many clients/do all of the things you mentioned…” and then they come up with another lower number. The number isn’t the issue, even though the $100K is totally doable. It is! I object to saying you want something without committing to it. That’s settling.

Discomfort with Receiving. Some of us—women especially—get into the habit of making everyone else around them comfortable first. And then they don’t have energy left to take care of themselves. Money is energy. If you give all of your energy away without first seeing to your own needs, it will all get used up on other stuff before there is any left for you.

Discomfort with Having. Some people feel uncomfortable having money, so they spend it. Although this is somewhat normal for new business owners who use early profits to reinvest in the business, if you never have money left over, regardless of how much money you’re making, then you need to resolve this block (or start hiding money from yourself).

Comparison. Whenever you compare your situation to someone else, you’re going to be unhappy. What’s more, the comparison makes you feel less than, powerless and messes with your self worth. Fundamentally, when you don’t feel worthy, it messes with your financial worth as well.

Listening to Others. I’ve heard it said that your income is an average of the top 5 people you spend the most time with—but I would refine that by saying the top 5 healthiest people you spend time with. Let’s face it, your buddy making $500K annually but is a total nut job won’t do much to elevate your mindset. But there are others who make well less than $100K annually who are so freaking Zen, they will make you better. You should spend time with people who elevate you in some way.

BTW – you can download my free ebook, Money Chakra, which I especially wrote to give deeper context to the whole money block issue!

Now that you know what money blocks are, let’s release them with these three steps!

Once my client spoke about the obstacles to her success, she could finally clear them.  Once you verbalize your block and how it personally applies to you, it stops having as much power.

Whenever you catch yourself worrying, stop and change your environment; stop engaging. Leave the room, take a few breaths, put on some music.

When you feel calm again, ask yourself: “What would be a word or phrase that better reflects the relationship I want to have with money in this situation?” Write it down and keep it in front of you for a few days, posted on your computer, on a mirror by your chair or any place you’ll see it.

Only when you are calm and clear, should you move forward and take action. Whatever action you decide to take, try something that you might not have done before, which helps you reinforce to yourself that the specific money block you had been struggling with is no longer an issue. Intention is everything.

True, most people tend to work on money blocks for years, but with every step you take, they will become less and less of an obstacle for you. And the sooner you start, the sooner you can eliminate them.

P.S. > Want to do some more work at understanding and clearing your money blocks?  Download my free ebook that creates a structure to understand all of this – I call it Money Chakra.

A Foolproof Method To Crush Your Money Blocks
October 30, 2019

How To Bust Through Your Money Limits
October 16, 2019

Is Your Scarcity Mindset Destroying Your Prosperity?
June 19, 2019

How Is Your Attitude Costing You Money?
March 13, 2019
Go to Top
If you'd like more information like this,
be sure to check out my free Money Chakra ebook.
Don't forget to also check out my FREE
Team Delegation Planning Worksheet.