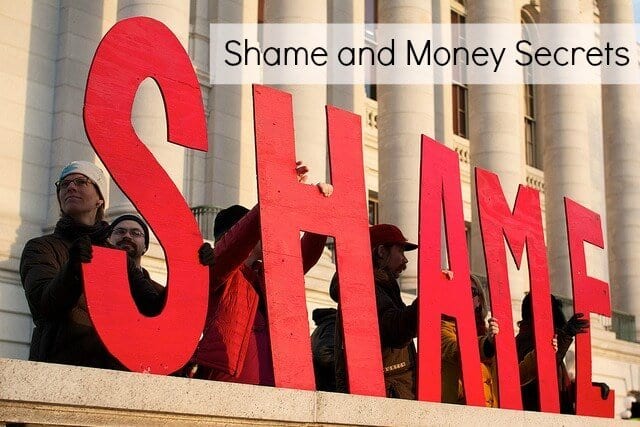 Money secrets from others

Sometimes we keep a money secret because we don’t want to deal with the questions and issues that will be raised if we reveal our secret.  Or we think it’s none of their business what goes on in our personal financial situation.  I happen to think it’s completely okay to keep quiet about some things.  For example, my parents know quite a bit about my financial situation, but they don’t know everything (so, is that a secret?  Not really, just not their business.).  I imagine they think they know more than they actually do, and I am okay with that.  They know that some times have been rough, but maybe not how rough . . . and they know when times have been good, but maybe not every single stupid money decision I have ever made.

Notice too I am making a distinction between active lying and non-disclosure; I don’t believe I actively lie about anything, but I certainly don’t feel like everyone needs the complete “E True Hollywood Story” train wreck version whenever something difficult occurs.

When to be transparent

With your loved ones and life partners:  I think you need to be absolutely transparent with your money.  People think that money is the #1 reason why marriages break up, but I think that statistic is sort of like saying that the reason a marriage broke up was because of cheating:  cheating may have caused the final break, but there were a million missed intimacies, communications and decisions made that led up to the cheating.  Same for money; money in and of itself is never the reason a marriage ends, it’s everything around it.  Money is a symptom.  Transparency ensures that at least communication about money will not be the marriage’s downfall.

Money secrets from ourselves

The other kind of more damaging secret is the one we keep from ourselves.  We rationalize that something happened a certain way—maybe a bankruptcy or a bad buying decision–and it was beyond our control.  We’re shamed by the event and we’re shamed by the idea that anyone might find out what happened to us.  There is a full-scale drama that plays out in our head, assuming that everyone we know will have a judgment about this money secret.  And maybe they do.

Some people think that the only way to cure themselves of the money secret is to come clean about it.  My question is, to who?  It’s true that shame is an isolating emotion, but I believe you can start to make changes and live more authentically without completely exposing your money secrets to the world, and let it all hang out.   I once heard it said, other people’s opinions of you are none of your business.  I think that frees us from looking for approval and validation from anyone but ourselves.  And if you’re shamed by something, sometimes you don’t get the affirming feedback you were hoping for from someone else.  So the only person to come clean to is yourself.

Whenever I discover something in my life that I feel shame about, I take time to process it.  Then I try to draw lessons from it.  I think almost everyone knows about when I have had hard times with my business, my former (or ongoing?) coffee and book addictions, how if I have cold, hard cash in my purse, it tends to get spent on stupid things.  I tend to not share DURING the struggle; only when I have come out the other side and have specific learnings that I think might help others.

Everyone worries about whether or not they are having a “normal” experience when they make a mistake with their money, but there are no normal experiences.  The mathematical definition of normal describes something that adheres to a pattern of behavior; the pattern typically falls over a bell curve distribution, with specific points falling into different percentiles.  It’s an average.

Brené Brown is a shame researcher, and she has found that the more you recognize your shame triggers, and the more you seek to understand the difference between reality and your perception of it that is causing shame, the less shame you actually feel.  Shame is not always just in your head; some people might judge you, but that action is more about their issues than it is about yours.

I think the key to knowing when you’re keeping secrets from yourself is asking:

Bottom line, if you’re feeling shame about something that happened, it’s okay to be gentle with yourself while you go through a healing process to exorcise that shame.  But you need to be absolutely clear on your reasons behind keeping a money secret, so that you’re never keeping the truth from yourself.

P.S.  If you think this might be an issue for you, you should check out my free ebook on the most common money blocks from an energy standpoint.  You can download that here.