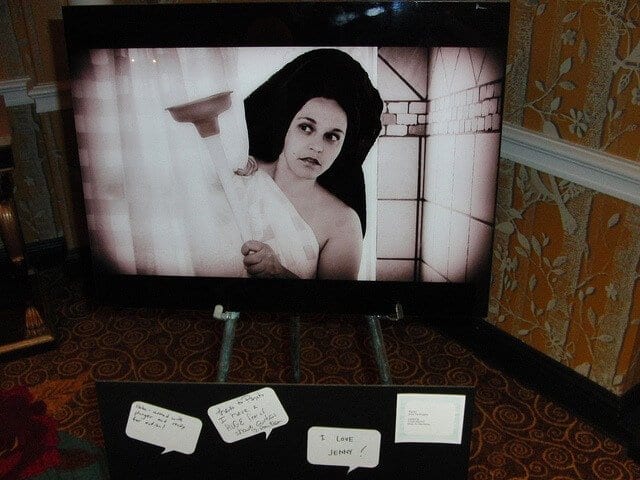 For those of you who don’t know her, @TheBloggess aka Jenny Lawson is the funniest woman on the planet—unless you’re easily offended, then you should probably just skip this post and all of the links.  She wrote a memoir called Let’s Pretend This Never Happened

which made me laugh so hard I couldn’t read it in public—because you can’t tell people what you’re laughing at; it’s always a little inappropriate.  After I read the book, I found her blog and basically went through from the beginning to see what I have been missing out on since 2007.  Because you should laugh at some inappropriate every day, I think.

Jenny’s father is a professional taxidermist, which informs her collection of old anthropomorphic taxidermy; she has an entire menagerie of creatures like cuban pirate alligators, home-making weasels, Shakespearean mice, heavily armed squirrels and vampire-slaying ducklings.  To the chagrin of her husband, Victor.

I didn’t notice her financial savvy at first because I was laughing too hard.  Then I realized she is a living example of someone who gets things done, regardless of all of the obstacles in front of her.  Here are the 6 ways I see her setting an example for good financial behavior:

1. Jenny understands the concept of economic incentive in marriage.

I did a post awhile ago about how when couples disagree on how to spend their money, they need to factor in the economic repercussions of not communicating and compromising; if there is no incentive to work together on the family financial life, things can fall apart.  Jenny demonstrated this perfectly when Victor vetoed her desire to buy new bathroom towels…so she went and bought a giant metal chicken.  You might feel sorry for Victor, but will he ever just dismiss her request without considering the consequences again?  I think not.

2. Jenny understands the concept of following your passion.

Jenny has an obsession with humane taxidermy (she doesn’t do the taxidermy, she collects the already-taxidermied animals she finds), and if I asked you to build a business around something as unusual as that, could you?  In fact, she has a Zazzle store where you can buy products with pictures of some of her taxidermied animals.   She’s built a blog and written a book where taxidermy is featured regularly.  She’s made humanely anthropomorphic taxidermied animals TAX-DEDUCTIBLE.  So the next time you hesitate to put yourself out there because you’re afraid your passion is weird and no one would pay you to do it, go read @TheBloggess.

Conscious spending is the idea that once you understand yourself, you don’t need to budget, because you automatically only spend money on the things that are important to you.  Jenny fell in love with a giant taxidermied boar’s head (I think it was a boar) that she tried to negotiate down to $25 at an estate sale (another financial strength; Jenny isn’t afraid to negotiate) but they wouldn’t budge.  Later, Victor took her back to the sale and got the head for $90, (listening to her financial desires, see?  Victor grew from that metal chicken thing).  The head went on to raise thousands of dollars for non-profits at Christmas and became featured on her best-selling holiday card…I’m not kidding.  Did Jenny want diamonds, clothes, and expensive trips?  No.  She was absolutely clear about what was important to her and knew that buying James Garfield (what she named the head) would satisfy her. Now that I think about it, James Garfield was more evidence that Jenny knows how to make good investments, because he paid for himself many times over.  We’ll call that a bonus financial strength that snuck up on us (not unlike a taxidermied boar’s head).

I get asked a lot: “What is going to happen to my money if we have some kind of economic breakdown?”  And I usually answer, “Didn’t we already have one?” or “I have no idea, I’m not psychic,” because I’m comforting like that.  If we have some kind of civilization breakdown, getting your money out of the bank will be the last thing on your mind (and it’s not even actually there people . . . but that’s an anxiety-producing post for another time).  Jenny understands this, and when she and Victor discuss disaster planning, it usually has to do with what to do when the zombies come, and at what point have they become irretrievably zombified and need to be killed with a flame thrower.  She even held a zombie apocalypse drill on Twitter.  Because there are just some things you can’t plan for financially.  But zombies?  You can totally plan for that.

Some people want to start a hobby and buy all brand-new stuff for it.  I always recommend that until you know for sure you actually like skiing, firing your own ceramics or want a pilates reformer in your spare bedroom, go on Craigslist and buy it used and try it out, wear it out before you actually drop major money.  Jenny supports this perfectly, because when she wants an alcoholic slushie, she didn’t insist that she needed a fridge that crushed ice, or even go out and buy an ice crusher—she used her kid’s Sno Cone machine.  And I might be making this up, because I couldn’t find her blog post about it, but I figure it just proves my point of inventive repurposing…I inventively repurposed reality (and it didn’t cost me a thing unless she sues me for misrepresentation…but I am hoping the alcoholic slushies interfere with that, if indeed she really drinks them and I am not just making it up.  This is starting to feel circular).

You always hear people saying, “If you really, really want something, you’ll figure out a way to have it.”  Jenny really wanted to go to Japan so she made a deal with a sex industry company to sponsor her trip in exchange for some satirical sex posts.  There was one picture of her naked and only covered by McDonald’s hamburgers, but I think she might have removed them (the pictures, not the hamburgers), since the trip was in 2009, and how long do you really want to sexually exploit yourself using fast food?  Especially if McDonald’s wasn’t actually sponsoring her.  And I’m also sort of wondering now why she didn’t cover herself with sushi, since she was in Japan.  I’ll bet that post cleared all of this up…Thanks for taking it down, Jenny.

Update:  I found the picture of the hamburgers.  And she decided against covering herself with sushi because it didn’t make sense from an economic standpoint.  See?  More ways she is making financial sense.

I always end my blog posts with things you should do to take action on the concepts I introduce, but I am sort of at a loss as to what things would be helpful and what things might mess you up…like don’t go soliciting sex-industry companies to sponsor you; there needs to be some kind of ramp-up to that sort of thing.

What You Can Do:

Don’t give up on yourself – your dreams can become real, no matter how crazy you think they are or how many obstacles you see.  Who knew that I would draw inspiration for personal finance from a humorist?  And you need to read her book to see what obstacles she faced and how she still made good financial decisions in spite of them.

Trust your spouse more – I am continually amazed at how far Jenny can push Victor (even on their anniversary) and yet how much he loves and supports her.  There may have been many people who would not have believed in Jenny’s ability to become a NY Times best-selling author, but Victor did.  Even if he objects to too many bath towels.

Accept what you can’t control – there are things in your financial life you can control, and things that you just can’t, like, Hurricane Katrina.  There is no point in worrying about financial apocalypse, because there is nothing you could do to prepare for it.

Have more fun – people get so deadly serious about their financial lives.  Stop it.

Have financial problems? Do this…
November 12, 2013
Go to Top
If you'd like more information like this,
be sure to check out my free Money Chakra ebook.
Don't forget to also check out my FREE
Team Delegation Planning Worksheet.