Which is your financial loophole? 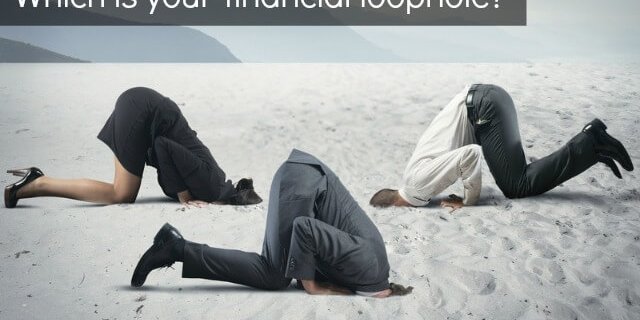 Gretchen Rubin, author of The Happiness Project has been posting about loopholes, because she  has made a study of loopholes as part of her research for her next book, Better Than Before, about habit-formation.

When we try to form and keep money habits, we often search for a financial loophole, for justifications that will excuse us from keeping this particular habit in this particular situation. However, if we catch ourselves in the act of loophole-seeking, we can perhaps reject them.

Here are the explanations of Rubin’s 10 Loopholes and how I see them relating to financial issues:

This is the loophole you invoke when you think you can’t have two things; I see a lot of people thinking they can’t make lots of money AND have lots of freedom.  Or you can’t pay down debt AND have fun.  Or that you can’t get organized with money because you’re too busy with a new baby, new job, etc.

Instead, ask yourself: “Can I have this and that?” or “Can I do this AT SOME LEVEL while maintaining my focus on my short-term priority?”  It’s surprising how often that’s possible.

Moral licensing loophole — “I’ve been so good, it’s okay for me to do this”

With this loophole, we give ourselves permission to do something “bad” (eat potato chips, bust the budget) because we’ve been “good.”  We reason that we’ve earned it or deserve it, or that some “good” behavior has offset something “bad.”

I’ve found that in the area of health, I had to “retrain my brain” to associate negative consequences with my perceived treat (that sugar will keep me up all night, or I was so sick the last time I had nachos, etc.).  With money, it might be reminding yourself of how you felt the last time you had a financial issue to head off that “deserving” mentality…and re-connecting that comfort trigger to something non-financial.

Tomorrow loophole — “It’s okay to skip today, because I’m going to do this tomorrow”

Now doesn’t matter much, because we’re going to follow good habits tomorrow.  I see this a lot when people start to track their spending, because when you begin, it’s sort of painful to see how you spent money—I equate it to stepping on the scale for the first time in a long time.

Some people even fool themselves into thinking that extreme indulgence now will give them more self-control when the magic future day arrives. This means that if you’re thinking of cutting back your spending, you might have a last hurrah and overspend (which is why I never tell people to budget).

I think this one is super sneaky, because sometimes people don’t even realize they are invoking it!  Especially with money issues, people fall into doing things because it never occurred to them that there was any choice involved (all of my friends did it…we have to have a big wedding…but we go out every Saturday night…but my kid said he wanted it).

Keep in mind that you choose ALL of your spending decisions…if you start with that as your reality, you’ll retain greater control.

Planning to fail loophole – Do you ever make apparently irrelevant decisions that end up wrecking your good intentions?  Like these?

I drove across town to Whole Foods to buy organic broccoli, and I ended up buying their special chocolate decadence torte.  Oops.

I’m not going to eat anything more tonight, but I’ll go into kitchen and look in the freezer. Just curious (Oops).

When it comes to keeping our good habits, instead of fleeing temptation, we often arrange to succumb. In what Dr. Alan Marlatt dubbed “apparently irrelevant decisions,” we make a chain of seemingly insignificant decisions that allow us covertly to engineer the very circumstances that we’ll find irresistible.

For people trying to get a better handle on money issues, this might look like going out to “just” window shop.  Or insisting you just need to hop on the internet to buy one thing, and buying 10 things.  To eliminate this loophole, you usually have to stop the irrelevant behavior.  One person I know actually tied a string around his fridge and freezer doors to remind himself not to look in there after dinner.

Questionable assumption loophole – Consciously or unconsciously, we make assumptions that influence our habits—and often, not for the better. They often become less convincing under close scrutiny.

I should be able to figure this out on my own.

It’s ridiculous to pay for a gym/a trainer/a home treadmill/a personal organizer/a financial advisor to help me with this behavior, when I could do it perfectly well for free

This loophole comes in the disguise as an embrace of life or an acceptance of self, so that the failure to pursue a habit seems life-affirming—almost spiritual. But for most of us, the real aim isn’t to enjoy a few pleasures right now, but to build habits that will make us happy over the long term. Sometimes, that means giving up something in the present, or demanding more from ourselves.

One of the most insidious of loopholes is the “one-coin loophole”— because it’s absolutely true. This loophole gets its name from “the argument of the growing heap,” in Erasmus’s Praise of Folly.  To summarize, this story highlights a paradox that’s very significant: Often, when we consider our actions, it’s clear that any one instance of an action is almost meaningless, yet at the same time, a sum of those actions is very meaningful.  Whether we focus on the single coin, or the growing heap, will shape our behavior. True, any one visit to the gym is inconsequential, but the habit of going to the gym is invaluable.

People often use this against you!  My dad is aware that I recommitted to daily exercise and eating healthy at the start of the year, yet even when I asked him NOT to send his usual round of Valentine’s Day treats, he did anyway and excused himself by saying, “You have such great discipline, I know you won’t go crazy and eat them all at once.”

What loophole do you invoke most often, to get yourself out of a habit that you’re trying to keep?

Stop Getting Emotional About Your Money
August 19, 2020

How To Align Financial Priorities With Action
August 5, 2020

How Do You “Do” Your Money?
July 8, 2020
Go to Top
If you'd like more information like this,
be sure to check out my free Money Chakra ebook.
Don't forget to also check out my FREE
Team Delegation Planning Worksheet.